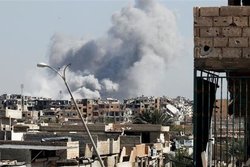 Nearly a dozen civilians, mostly women and children, have been killed after the US-led coalition purportedly fighting the Daesh Takfiri terrorist group carried out a series of aerial assaults in Syria’s troubled eastern province of Dayr al-Zawr.

The report added that the victims were all members of the same family.

The development came only a few hours after eleven people lost their lives in similar airstrikes against al-Shaafah town.

The air raids severely damaged private property in the targeted area as well.

On December 29, 2018, a military-diplomatic source said the planned withdrawal of US troops from Syria would expose the extent of war crimes committed by the US-led coalition.

“The upcoming withdrawal of US military personnel from Syria will most likely shed light on numerous war crimes committed by the international coalition during the so-called fight against [the] Daesh terrorist group.

“First of all, this concerns, of course, the much hyped liberation of Raqqah in October 2017, which has transformed into a 'ghost city' as a result of carpet bombings by coalition aircraft,” Russia’s Sputnik news agency quoted the unnamed source as saying.

The source went on to say that Takfiri militants operating in the al-Tanf region were constantly trying to flee from the area and take refuge either in adjacent regions or even in neighboring Jordan in the wake of the announcement of US plans to withdraw troops from Syria.

“After the announcement of the imminent withdrawal of US soldiers, the entire 'hive' of the militants there … was set in motion. Almost every day, the militants attempt to break through from there not only to the territory controlled by Damascus in Syria, but also to Jordan,” the source said.

Syria has on numerous occasions condemned airstrikes by the US-led coalition, asking the UN to force Washington and its allies to put an end to their military intervention in the Arab country.

On November 13, the Syrian Ministry of Foreign Affairs and Expatriates condemned an airstrike earlier that month by the US-led coalition against the eastern town of al-Shaafah, which left more than 60 people dead and injured, arguing that the massacre clearly pointed to the fact that members of the military alliance had no respect for moral values, international rules and regulations besides the lives of innocent civilians.

The ministry, in two separate letters, addressed to United Nations Secretary General Antonio Guterres and the former rotating president of the UN Security Council Ma Zhaoxu, called on the Security Council to fulfill its responsibilities and stop US-led aerial assaults.

It also asked the world body to propose an international, independent and impartial mechanism to investigate the crimes being perpetrated by the US-led coalition.

The letters noted that the coalition was deliberately targeting Syrian civilians and making use of internationally banned weapons, including white phosphorus bombs, in Syria.

The ministry stressed that the US-led coalition airstrikes were meant to kill as many Syrian people as possible, prolong the ongoing Syria conflict, destroy the country’s infrastructure and undermine its sovereignty and territorial integrity in flagrant violation of all UN Security Council resolutions on the Arab country.

The letters concluded that the embarrassing silence of the Security Council had encouraged the coalition to kill more Syrian civilians and destroy their property.

Tags: Syria US Dayr al-Zawr
Short Link rasanews.ir/201rCZ
Share
0
Please type in your comments in English.
The comments that contain insults or libel to individuals, ethnicities, or contradictions with the laws of the country and religious teachings will not be disclosed