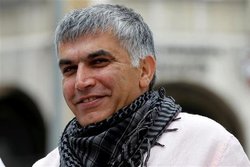 RNA - The Court of Cassation, whose verdicts are final, on December 31 rejected Rajab’s appeal and upheld his prison sentence over tweets deemed critical of the Manama regime and the deadly Saudi-led war against Yemen.

On February 21, Bahrain’s criminal court sentenced the distinguished human rights activist to five years in prison for tweeting in 2015 about torture in the Jaw Prison and censuring the Saudi-led war on Yemen.

According to a court document, Rajab was found guilty of “spreading false news and rumors in time of war,” “insulting foreign countries” and “insulting publicly the interior ministry” in comments posted on Twitter.

The pro-democracy campaigner has already served a two-year jail sentence over a news interview in which he said Bahrain tortured political detainees. Rajab completed this sentence in July.

Tags: Manama Bahrain Nabeel Rajab UN
Short Link rasanews.ir/201rCY
Share
0
Please type in your comments in English.
The comments that contain insults or libel to individuals, ethnicities, or contradictions with the laws of the country and religious teachings will not be disclosed