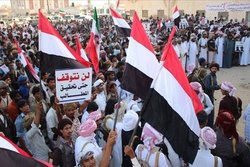 Saudi Arabia is facing mounting opposition in areas it occupies in Yemen, leading US daily the Wall Street Journal has reported.

RNA - Many view Saudi presence and its alleged development projects as a pretext for the kingdom to entrench its control in the country by controlling Yemen's highly vulnerable infrastructure, the Wall Street Journal said.

“We are under Saudi occupation. We don’t need the Saudis,” it quoted former deputy governor of al-Mahra Ali bin Salem al-Huraizy, who has helped organize protests against the Saudi presence in the past.

Saudi Arabia has taken control over the province's seaports and airports, using them to deploy hundreds of troops in the region.

“There are illegitimate troops in these areas. Are there forces that belong to the Houthis to be fought by the coalition here? The answer is a big ‘no’,” al-Mahra and Socotra People’s General Council member Abdullah bin Issa al-Aafra said.

A senior Yemeni official close to the country's Saudi-backed former president Abd Rabbuh Mansour Hadi explained that even Saudi-allied Yemeni officials had no control over the kingdom's expansion in the region.

“We are allied with the Saudi-led coalition, but we don’t accept any violation of our sovereignty,” he said, speaking on the condition of anonymity in fear of Saudi retribution.

Many demonstrations have been organized against the Saudi “invaders” since April. In November, Saudi-backed soldiers killed at least two people during a demonstration.

Saudi-backed governor of al-Mahra province Rajeh Saidbakrit claimed those killed were terrorists who had attacked a checkpoint. Huraizy, however, rejected the statement, saying they were ordinary protesters.

Saudi Arabia and its allies unleashed the deadly military aggression against Yemen in March 2015 in an attempt to reinstall the country’s former Riyadh-allied regime.

The efforts have gone down the drain, forcing the kingdom to push for peace with Yemen's Houthis and their allies in the Yemeni army.

UN envoy for Yemen Martin Griffiths plans to visit the Yemeni capital of Sana'a on Saturday.

The trip will be part of a new round of talks to follow up on progress made in Stockholm in December where both sides agreed to a prisoner exchange and a truce in Yemen’s port city of Hudaydah.

Houthi explained that the food was not allowed into the country for violating "standards and regulations and is not suitable for human consumption."

He also accused UN organizations of being biased in their work.

"The work of these organisations is mostly politicized, and their position... confirms their work has shifted from independent to subordinate" to the United States and Britain, he said.

Yemen’s Houthi movement, which runs state affairs in Sana’a in the absence of an effective government, has been defending the nation against the Saudi aggression.

The Saudi-led offensive has destroyed Yemen's infrastructure and led to famine in the import-dependent state.

Tags: Yemen Houthi Saudi
Short Link rasanews.ir/201rCW
Share
0
Please type in your comments in English.
The comments that contain insults or libel to individuals, ethnicities, or contradictions with the laws of the country and religious teachings will not be disclosed