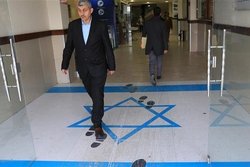 Jordan’s Professional Unions Association has decided to place the Israeli flag in the entrances of all its buildings, following Tel Aviv’s protest at photos of a Jordanian minister stepping on the regime’s flag.

RNA - The association chief Ibrahim Tarawneh ratified the decision, with the London-based Rai al-Youm newspaper saying the decision was reached following public discourse on the issue.

It was made in condemnation of Israel's continued occupation of the Palestinian territories and in response to a complaint Israel submitted to Jordan's Foreign Ministry on the matter, it said.

On Sunday, the Israeli regime said it had filed a strong condemnation with the Jordanian government over the photo of Jordanian Information Minister Jumana Ghunaimat stepping on the Israeli flag in the engineers' union building in Amman, which it described as an "act of disrespect."

Jordan said in response to Israel's complaint that the building was privately owned and that the government could not intervene in the matter.

Jordan's Professional Unions Association is known for opposing peace accords with Israel and is an important leader in public opinion.

Israel and Jordan have maintained diplomatic relations since they signed a peace deal in 1994. However, many Jordanians strongly oppose Amman's ties with Tel Aviv.

Relations have often been frosty amid differences over Israeli policies in Jerusalem al-Quds, where Jordan is custodian over Muslim sites, and toward the Palestinians.

Sisi made the controversial remarks in an interview due to be broadcast Sunday, but the US news outlet said the Egyptian government has demanded that CBS not air it.

Asked whether cooperation between the regimes could be described as the "closest ever," Sisi said: "That is correct."

“We have a wide range of cooperation with the Israelis,” he added.

CBS said on Thursday that it had rejected Egypt's demands and will air the interview on 6 January.

"The 60 Minutes team was contacted by the Egyptian ambassador shortly after [the interview] and told the interview could not be aired," CBS said on its website, where it shared a short excerpt of the interview.

The news outlet described it as "the interview Egypt's government doesn't want you to see".

According to Press TV, Sisi and Saudi Crown Prince Mohammed bin Salman have reportedly been working to persuade other Arab leaders to establish close trade ties with Israel.

Last year, Israel signed a multi-billion-dollar deal with Egypt to supply natural gas to the northeast African country over a span of ten years.

Cairo has also been accused of acting as Israel’s proxy in maintaining Tel Aviv’s years-long blockade on the Palestinian territory of the Gaza Strip.