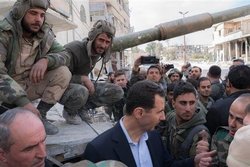 Seven years ago – around 10 months after the outbreak of militancy in Syria – President Bashar al-Assad made a solemn assertion, which is today proving to be true. He said in an address to a group of Syrian youths, “Soon after the crisis, you will see the same Arab countries that are now hatching plots against us return to Damascus to apologize.”

RNA - The Syrian leader was responding to a question about the hostile stance certain Arab states had taken against his country back then. “This is nothing new to us. We Syrians are noble Arabs and will not back off from our position.”

Syria, he added, “is destined to suffer from more unrest due to their conspiracies. No one should expect peace to prevail as long as we say no to the US, not even after we emerge victorious from this war.”

In 2011, when the crisis hit, the Arab countries closed down their diplomatic missions in Damascus in protest at what they described as the Assad government’s crackdown on protests.

However, now that the national Syrian army has dealt stinging blows to the foreign-backed terrorists operating against the government and liberated almost all of the country’s soil from the mercenaries, those Arab countries appear to be in a race to reopen their embassies in Damascus.

Last month, Sudanese President Omar al-Bashir – who has, over the past years, built good relations with Saudi Arabia and the United Arab Emirates (UAE) -- became the first Arab head of state to pay an official visit to Damascus and sit down for talks with his Syrian opposite number since the start of the conflict. Reports say Mauritania is also mulling over such a trip to the Middle Eastern country.

Commenting on Bashir’s surprise visit to the Syrian capital, al-Sudan al-Youm daily wrote: The Sudanese leader paid the visit once he made sure Syria had won the war and was now back on its path forward. He could have come to the conclusion that the resistance front had foiled all anti-Syria plots. The visit may have also been a response to recent reports that Israeli Prime Minister Benjamin Netanyahu was due in Sudan soon. (Khartoum has formally rejected those reports.)

In that regard, Dr. Ing. Muhammad Khair al-Akam, an expert on political and international affairs, told Russia’s Sputnik agency that Bashir’s visit “has a clear message that the Arabs are knocking on the door of the Syrian Republic.”

Anwar Gargash, the Emirati minister of state for foreign affairs – once a staunch advocate of the terrorists fighting to topple President Assad -- took to his twitter page to justify Abu Dhabi’s move. “The UAE decision...came after a conviction that the next stage requires the Arab presence and communication in the Syrian file,” he said.

The Emirati Foreign Ministry, in turn, said in a statement that “the step confirms that the UAE government is keen to restore relations between the two brotherly countries back to normal,” and that the move is “to activate the Arab role in supporting Syria’s independence, sovereignty, unity and safety and prevent the dangers of regional intervention in Syria’s Arab affairs.”

Abu Dhabi’s dramatic U-turn comes about seven years after the UAE – along with Saudi Arabia, Qatar, Egypt and Bahrain – suspended Syria’s membership in the Arab League.

Eight years of Syrian resistance proved to the Emirates and other regional states that Syria is capable of thwarting all Western-Arab plots against it and keep standing strong. That is why they are speeding past one another to fix their ties with Damascus.

Besides Sudan, the UAE and Bahrain, Jordan is also reported to be considering normalizing with Syria. It seems the first state that came out in support of anti-Damascus militants has now changed course and is seeking to become the first state to send an ambassador to Syria.

“Our relations with Syria will be restored to where they were in the past,” said King Abdullah II on 23 December.

Meanwhile, the Saudi regime – a major sponsor of the Takfiri terrorists wreaking havoc on Syria – is apparently determined not to fall behind its allies. Lebanese MP Abdul Rahim Mrad, who acts as a mediator between Damascus and Riyadh, said Saudi Crown Prince Mohammed bin Salman showed no negative reaction to the idea of reviewing ties with Syria.

Mrad further said he would continue efforts to arrange a meeting between Saudi officials and Ali Mamlouk, Assad’s security advisor.

It seems 2018 could not have had a better ending for President Assad of Syria.

Germany’s Deutsche Welle wrote, “Syria enters 2019 with all signs pointing to it being re-accepted into the Arab fold. The diplomatic shift is a recognition that the war has been won and Arab states need to exert influence in a post-conflict Syria.”

The German broadcaster highlighted Tunisia’s efforts to get President Assad to attend an Arab League summit it is slated to chair later this year.

Prominent journalist Abdel Bari Atwan, the editor-in-chief of Rai al-Youm, recently described 2019 as the year of victories for the Syrian nation. The new year, he believes, will see the defeat of American plots in the region and the restoration of dignity to its people.

Atwan highlighted US failures in the region and said US President Donald Trump admitted that his country had vainly spent $7 trillion in the Middle East. He visited a base hosting American troops in Iraq as quietly as a mouse, while trembling with fear, the journalist added.

"We have entered a new phase: the axis of resistance's victory in the region. Israel is currently in a state of fear. The Arab states that are moving towards normalization with Israel will regret their move. Hezbollah is a growing power of the region, possessing over 150,000 high-precision missiles. The Arabs need to admit their mistakes, join the resistance front and stand against the Israeli enemy," the journalist said.

In the meantime, 2019 came to an end with yet another Trumpian surprise. The US president's announcement of a plan to pull American troops out of the Middle East's hotspot shocked the allied players on the Syria scene, including the Arab regimes, Israel and the foreign-backed terrorists, pushing them to the verge of crisis.

Despite some criticism at home, Trump said US military forces are no longer needed in Syria since the Daesh Takfiri terror group has been defeated there.

Observers, however, cast doubt on Trump's statement and said the retreat is more indicative of the defeat of the US and its allies in Syria than that of Daesh. Trump's policy shift affected, more than anything, the Arab regimes and the proxy terrorists, promoting them to make a U-turn and retreat.

With the US military preparing to pull out, the fate of the US-backed terror groups active near Washington's al-Tanf base in southeastern Syria is now hanging in the balance.

Syrian media reports say the withdrawal plan has already created a rift in the ranks of the terrorist outfits operating in the vicinity of the al-Tanf base. Several of those militants are getting ready to surrender to the Syrian army, while others have joined other terror groups.

However, the American plan has most angered the Zionist regime, Washington's main ally in the region which has been providing all-out support to the anti-Damascus terrorists since the start of the crisis.

Only hours into Trump's announcement, Israel's Channel 10 described the plan as a slap in the face of the Tel Aviv regime. An expert in military affairs told the news channel that Washington's withdrawal would kill the only bargaining chip to secure Iran's exit from Syria and hamper Israel's attempts to confront Hezbollah.

The regime recently carried out airstrikes against targets near the Syrian capital, in what could be a sign of stepped-up support for the terrorists in the absence of the US, but given the latest developments in Syria, Israel's belligerent policies seem to be doomed to fail.

The Arab green light to renewed diplomatic ties heralds a stable Syria and the downfall of the enemy front. It appears the New Year will see more developments unfold in Syria.

This is a condensed reproduction by Press TV of an analysis piece recently published in Iran's Persian-language Jomhouri-e-Eslami (Islamic Republic) daily newspaper.

Tags: Bashar al-Assad Syria Israel
Short Link rasanews.ir/201rCI
Share
0
Please type in your comments in English.
The comments that contain insults or libel to individuals, ethnicities, or contradictions with the laws of the country and religious teachings will not be disclosed