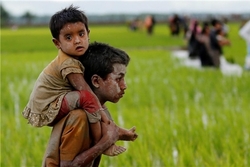 The UN spokesman for the secretary general, Farhan Haq, said the Rohingya were "forced to flee fighting between the Arakan Army and the Myanmar military” that began last month, Anadolu Agency reported.

Haq stated that a UN team was sent to investigate and assess the needs of the uprooted community needs.

The UN has documented mass gang rapes, killings --- including of infants and young children --- brutal beatings, and disappearances committed by Myanmar state forces. In a report, UN investigators noted that such violations may have constituted crimes against humanity.

Since August 25, 2017, nearly 24,000 Rohingya Muslims have been killed by Myanmar’s state forces, according to the Ontario International Development Agency (OIDA).

According to Amnesty International, more than 750,000 Rohingya refugees, mostly children and women, have fled Myanmar and crossed into Bangladesh after Myanmar forces launched a crackdown on the minority Muslim community.

Last month, the US House of Representatives passed a resolution calling the ongoing violence against the Rohingya "genocide".

Tags: Rohingya Rakhine Muslim UN Myanma
Short Link rasanews.ir/201rCG
Share
0
Please type in your comments in English.
The comments that contain insults or libel to individuals, ethnicities, or contradictions with the laws of the country and religious teachings will not be disclosed