'Israel acts like Nazis in dealing with Palestinian inmates' 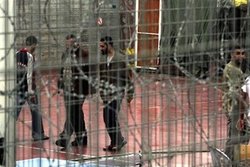 An activist has drawn an analogy between the Israeli and the Nazi regimes in their treatment of prisoners, saying that Tel Aviv's attempts to worsen the already dire conditions for Palestinian inmates provide proof that it is “a colonial settler state.”

Israel has announced a plan to impose severe restrictions on members of Palestinian resistance groups held in the regime's prisons.

Public Security Minister Gilad Erdan announced the plan at a press conference in Tel Aviv on Wednesday, saying it would likely be implemented in the coming weeks once approved by the Israeli cabinet

"Actually, the Nazi regime used to limit the water to prisoners also in the concentration camps. This is the behavior of a colonial settler regime and there is only one way to deal with it and that is for sanctions and boycotts against Israel,” he proposed.

According to official statistics, the number of Palestinian prisoners in Israel’s jails is around 5,500, including 230 children and 54 women.

In many cases, the regime resorts to a measure known as administrative detention against Palestinians. The method involves imprisonment without trial or charge that allows Israel to incarcerate Palestinians for up to six months. The detention order can be renewed for indefinite periods of time.

Tags: Palestinian Nazi Israel
Short Link rasanews.ir/201rCE
Share
0
Please type in your comments in English.
The comments that contain insults or libel to individuals, ethnicities, or contradictions with the laws of the country and religious teachings will not be disclosed