Israel to come down hard on Palestinian prisoners 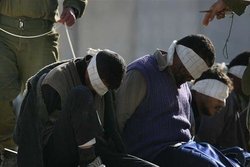 Israel announces a plan to impose severe restrictions on members of Palestinian resistance groups held in the regime's prisons.

RNA - Israeli Public Security Minister Gilad Erdan announced the plan at a press conference in Tel Aviv on Wednesday, saying it would likely be implemented in the coming weeks once approved by the Israeli cabinet, The Times of Israel reported.

He said the plan involved separating prisoners that belonged to the same resistance movements. “I have decided that the Prisons Service will stop holding the prisoners in wings based on their organizational affiliation,” Erdan noted. Jailing Palestinians of same groups together had resulted in strengthening of “their organization identity,” he said.

The prisoners would, meanwhile, no longer be able to cook for themselves. The inmates, he alleged, “provided for themselves food that’s in some ways better than the food given to criminal prisoners.”

“There will be clear limits on the amount of water a prisoner may consume each day, the times in which they can shower will be limited and eventually the showers will be moved out of the wings. Then we’ll be able to have better oversight and limit their use,” the minister said.

Limiting prisoners' access to television and reducing the number of family visits were also among the limitations.

According to Press TV, the official claimed the plan sought to pressure the Palestinian resistance movement of Hamas into releasing two Israeli troops, which Erdan alleged it was holding.

According to official statistics, the number of Palestinian prisoners in Israel’s jails has reached 5,500, including 230 children and 54 women.

In many cases, the regime resorts to a measure known as administrative detention against Palestinians. The method involves imprisonment without trial or charge that allows Israel to incarcerate Palestinians for up to six months. The detention order can be renewed for indefinite periods of time.

Tags: Israel Palestinian prisoner
Short Link rasanews.ir/201rCC
Share
0
Please type in your comments in English.
The comments that contain insults or libel to individuals, ethnicities, or contradictions with the laws of the country and religious teachings will not be disclosed