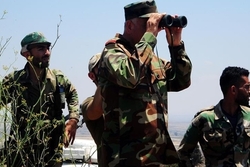 The Damascus Army sent more troops and military equipment to the Eastern deserts of Deir Ezzur over the past 24 hours, preparing for a large-scale operation to hunt down the remaining pockets of the ISIL terrorists.

RNA - The Syrian Army dispatched the 4th Division and a part of Presidential Guard Forces to the Eastern desert of Syria from the small town of al-Dowayer up to the town of al-Hari near border with Iraq in Southeastern Deir Ezzur.

The Syrian Army forwarded more troops and military equipment to the Eastern deserts of Deir Ezzur on Wednesday, preparing for a large-scale operation to hunt down the remaining pockets of the ISIL terrorists.

The army dispatched the 4th Division and a part of Presidential Guard Forces to the Eastern desert of Syria from the small town of al-Dowayer up to the town of al-Hari near border with Iraq in Southeastern Deir Ezzur.

The army's growing military buildup in the Eastern desert of Deir Ezzur indicates that the government forces are preparing for a major operation to purge the entire region of the ISIL terrorists and put an end to any movement of the terrorists between Syria's Deir Ezzur desert and Iraq's Anbar.

The army's main objective is restoring sustainable security to the borders with Iraq.

Russian fighter jets and reconnaissance planes have increased their flights over terrorist-held regions in Idlib province as the Syrian Army dispatched more troops to the region for a major assault on the militants, local sources reported on Wednesday.

Militant-affiliated sources reported that the warplanes have been intensely flying over terrorist-held regions in Idlib, adding that the Russian Sukhoi AM-24 have been engaged in spying flights to specify terrorist positions and bases in the region.

In the meantime, the Syrian Army dispatched a long convoy, including tens of forces and a large volume of military equipment to Northern Hama.

The army has forwarded a large number of forces and a large volume of military hardware to contact lines with the terrorists in the demilitarized zone in Northeastern Lattakia and Hama, preparing for a major operation to hunt down the militants.

The Turkey-backed militants continued attacking Kurdish militia in Northeastern Aleppo on Wednesday as possibility rises for direct confrontation between the Syrian and Turkish armies.

The Arabic-language website of the Kurdish news website, Hawar news, reported that the Ankara-backed militants attacked the positions of al-Bab Military Council in the villages of Albuhij and Bou Qaz near the town of al-Arimah East of the town al-Bab in Northeastern Aleppo regardless of the Syrian Army's presence in the region.

It further said that gunmen of al-Bab Military Council managed to repel the Ankara forces' attacks.

In the meantime, Manbij Military Council's media center reported that gunmen of the Turkey-led Euphrates Shield forces targeted the council's positions at Sajoiur line of separation near the town of Manbij in Northeastern Aleppo.

According to Fars News Agancy, the center further said that the Ankara-backed militants launched heavy shelling on the small towns of Jokhar Kabir East on Manbij, al-Mohsenli West of Manbij and the villages of al-Baraziyah West of the town of al-Arimah and also al-Koridiyah region in Northeastern Aleppo.

Military expert said that the Ankara-backed militants' continued attacks on the Kurds regardless of the Syrian Arm's presence in the region have increased the possibility of direct confrontation between the Damascus forces and militants as well as the Turkish army that is backing the latter.

Meantime, heavy infighting between Tahrir al-Sham Hay'at (the Levant Liberation Board or the Al-Nusra Front) and rival terrorist groups, backed up by the National Liberation Front (NLF), in Western Aleppo inflicted tens of casualties on both warring sides on Wednesday.

A sum of 40 terrorists were killed and tens more were wounded in a fresh round of heavy infighting between Tahrir al-Sham and NLF-affiliated Nouralddeen al-Zinki in Western Aleppo.

Abu Ahmad Homsi, a notorious commander of al-Zinki, was killed in the infighting near the town of Dar al-Izzah, a field source said, adding that tens of civilians have also been killed or wounded in the clashes between rival terrorists.

Tahrir al-Sham seized the village of Basratoun in Western Aleppo and entered the strategic town of Dar al-Izzah following the clashes.

Tags: Syria ISIL Aleppo
Short Link rasanews.ir/201rCB
Share
0
Please type in your comments in English.
The comments that contain insults or libel to individuals, ethnicities, or contradictions with the laws of the country and religious teachings will not be disclosed