Iran Not to Allow Enemies Endanger Strait of Hormuz Security 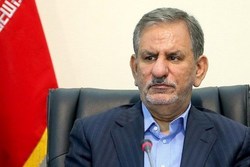 First Vice-President Eshagh Jahangiri underlined that Iran as the guarantor of the Persian Gulf's security will not allow enemies to threaten the stability of the Strait of Hormuz.

"The Islamic Republic of Iran will powerfully not allow the security of Hormuz to be endangered,” Jahangiri said.

In relevant remarks in early December, Commander of Iran's Army Major General Abdolrahim Moussavi underlined that the country's naval forces are guarantors of peace and security in the strategic Persian Gulf region.

"Synergy between the Iranian Navy and the Islamic Revolution Guards Corps (IRGC)'s Navy and support of other Armed Forces have turned the Islamic Republic into the ruler and protector of the Persian Gulf, the Strait of Hormuz and the Sea of Oman," General Moussavi said, addressing a ceremony to launch the country's most advanced home-made destroyer, Sahand, in the Southern waters of Iran in Hormozgan province.

He added that this synergy also empowers Iran to give a crushing response to enemies' moves to foment insecurity in the region, warning that the hegemonic powers, headed by the US and Israel, attempt to make the regional states insecure.

General Moussavi said that Iran has been for 40 years fighting against these countries which violate the human rights. "It will not take long for us to witness annihilation and disgrace of these disloyal international powers."

Tags: Iran Strait of Hormuz Eshagh Jahangiri
Short Link rasanews.ir/201rC5
Share
0
Please type in your comments in English.
The comments that contain insults or libel to individuals, ethnicities, or contradictions with the laws of the country and religious teachings will not be disclosed