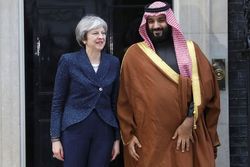 The United Kingdom government should be held accountable for the spread of terrorist activities in the country and elsewhere in the West, says a political analyst from London after a fresh terror attack in the British city of Manchester injures three people.

RNA - “When there is a terrorist attack or even an apparent terrorist attack in the UK, we have to ask the question as what are the psychological and political forces which lead people to think they have a right to murder others,” said William Shakespeare in an interview with the Press TV on Wednesday.

Shakespeare said most of the terrorist attacks carried out in the UK and elsewhere these days are “coming from a source which can be identified”, adding that the specific source lies in ideologies like “Wahabbism, Takfirisim, and Salafism which is centered in Saudi Arabia”.

The expert said the UK was in fact responsible for the outbreaks of terrorism in the West as it supports Saudi Arabia and the regime's export of the "consequences" of terrorist ideologies to other parts of the world.

“Its monstrous that in the Wahhabist, Takfiri, Saslafist ideology, they are encouraged and allowed to killed other Muslims, this is a sort of insanity. It is tolerated by our government,” he said.

The political analyst said no one expects countries like the UK to be able to eradicate terror-related ideologies like Wahabbism. However, he added that when it comes to taking steps to prevent the Wahhabi ideology from spreading, the UK and others have no courage and determination to do so.

“We don't have the guts to stand up and say ... We, in practical terms, we actually support the sources of this,” he said, adding, “We are hand in glove with the autocratic regimes in the Middle East.”

The expert said the policy for governments like the UK after terrorist attack has been to simply blame individuals for following terror-related ideologies while they never mention the support they have provided for countries like Saudi Arabia.

“We ought to be ashamed of ourselves that we go around even blaming perhaps people who are not all that intelligent in the UK for picking up on these things, things which we in practice encourage and support,” said Shakespeare.

Tags: UK Terror terrorist
Short Link rasanews.ir/201rC4
Share
0
Please type in your comments in English.
The comments that contain insults or libel to individuals, ethnicities, or contradictions with the laws of the country and religious teachings will not be disclosed