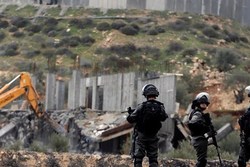 According to Jerusalem Post, after an Israeli settler from Efrat settlement died in a stabbing attack in September, Efrat residents renewed calls for a new settlement project in Khillat al-Nahla area in Bethlehem, which the settlers call Givat HaEitam.

Israel's so-called Civil Administration allowed Efrat settlers to create an agricultural facility on the site. In late December, the administration posted a notice on its website announcing plans for new housing units on 1,182 dunums of Palestinian-owned land.

Israel in 2009 confiscated about 1,700 dunums of Palestinian land located North of Bethlehem in preparation for annexing them to Efrat settlement.

The confiscation move was aimed at paving the way for the construction of 2,500 settlement units in Efrat after obtaining the government's approval.

The current and sudden movement on the project, Jerusalem Post noted, comes as Israel's Prime Minister Benjamin Netanyahu seeks to win the support of right-wing voters.

Israel holds that Efrat, which is part of Gush Etzion settlement bloc, will be part of its final borders in any final status agreement with the Palestinians.

E2 project in Efrat is in many ways similar to E1 which is aimed at isolating Jerusalem from the rest of the West Bank.

Peace Now said in a statement that Israel had "crossed a redline" and that the project "could deal a fatal blow" to the chances for peace and the possibility of a two-state solution to the Palestinian-Israeli conflict.

Efrat is one of the fastest growing settlements in Gush Etzion. It is also the second largest community in the bloc, with over 9,000 residents.

Tags: Israel Settlement Bethlehem
Short Link rasanews.ir/201rC0
Share
0
Please type in your comments in English.
The comments that contain insults or libel to individuals, ethnicities, or contradictions with the laws of the country and religious teachings will not be disclosed