US, Israel have nothing other than this planet to pull out of 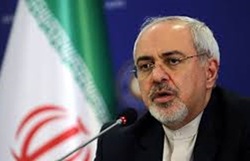 Iranian Foreign Minister Mohammad Javad Zarif has censured the recent decision by the United States and Israel to leave the United Nations Educational, Cultural and Scientific Organization (UNESCO), arguing that Washington and the Tel Aviv regime have no respect for international conventions.

RNA - Zarif, in a post published on his official Twitter page on Tuesday, said the administration of US President Donald Trump has already pulled out of Iran nuclear agreement, officially known as the Joint Comprehensive Plan of Action (JCPOA), the North American Free Trade Agreement (NAFTA), the Trans-Pacific Partnership (TPP) deal as well as the Paris climate accord.

After #JCPOA, #NAFTA, #TPP, Climate Convention & ..., the Trump regime—along with the Israeli regime—today officially withdrew from #UNESCO. Is anything left for the Trump Administration and its client regime to withdraw from? Perhaps from planet Earth altogether?
— Javad Zarif (@JZarif) January 1, 2019

The top Iranian diplomat noted that the departure of the United States and the Israeli regime from the United Nations cultural agency would leave them not international agreement other than removal from the earth.

The United States and Israel officially pulled out of the UNESCO late on Monday over what they described as the world body’s anti-Israel bias.

According to Press TV, UNESCO infuriated Washington and Tel Aviv after granting Palestine full membership in 2011, and criticizing Israel for its occupation of East Jerusalem al-Quds.

The US and Israel stopped paying their dues to UNESCO as a result. Both lost their voting rights in 2013.

Israel has also been angered by the recognition of several historical sites as Palestinian, with the Israeli regime claiming them as its own.

Tags: Zarif Iran US Israel
Short Link rasanews.ir/201rBu
Share
0
Please type in your comments in English.
The comments that contain insults or libel to individuals, ethnicities, or contradictions with the laws of the country and religious teachings will not be disclosed