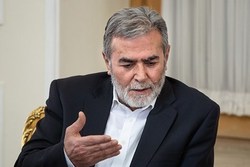 Secretary-General of the Palestinian Islamic Jihad resistance group Ziyad Rashid al-Nakhalah, in a Tuesday meeting with Chairman of Iran-Palestine parliamentary friendship group Amir Khojasteh, underlined that resistance is the only way to end Israeli occupation.

During the meeting in Tehran, al-Nakhalah, for his part, thanked Iran for its efforts and support to the Palestinian people and the resistance movement.

He noted the many victories achieved by the resistance movement in recent years despite difficulties, and promised that more victories are on the way in the fight against the “Israeli regime”.

He further stressed that resistance is the only way to liberate the Palestinian occupied territories.

Khojasteh, for his part, asserted that the Palestinian cause is still the first and foremost priority of the Islamic world and Muslim nations.

He added that Muslim countries would continue to stand against the occupying regime of Israel until the full liberation of Jerusalem al-Quds and all the Palestinian occupied territories.

Khojasteh stressed that the support of the Islamic Republic of Iran to the Palestinian cause stems from Islamic and ideological principles.

He then noted the US’ many cases of failure in Syria, Iraq and Afghanistan, saying the world would soon come to see Washington’s total defeat in Palestine and the end of the occupying regime of Israel.

In a related front, Secretary of Iran's Supreme National Security Council (SNSC) Ali Shamkhani met al-Nakhalah in Tehran on Sunday, and said that US President Donald Trump's 'Deal of Century' was a plot against the Palestinian nation and the region.

"Implementation of this plot (Deal of Century) is a big blow to Palestine, and resistance groups and vigilant regional nations will prevent materialization of this ominous intention," Shamkhani underlined.

He also referred to the continued successes of popular forces in the fight against the terrorist groups which are supported by the US, Israel and Saudi Arabia in Iraq, Syria and Yemen, and said today the resistance front is more successful than any other time against the hegemonic powers.

"This trend will no doubt speed up materialization of the Palestinian people's cause," Shamkhani said.

In relevant remarks last Sunday, Iranian Foreign Minister Mohammad Javad Zarif asked all Islamic states to bury their hatchets and grow united in supporting the Palestinian people against the US and Israel.

"Despite some differences, the Islamic world should come together around the pivot of support for Palestine to prevent a mistreatment of the issue," Zarif said in a meeting with senior Hamas official Mahmoud al-Zahar in Tehran.

"Support for Palestine is one of the principled policies of the Islamic Republic and we hope that some Islamic governments which are delighted with the Zionists and US support turn around and come to realize that the Zionists are not a reliable friend and partner for anyone," he added.

Zarif expressed displeasure in some Muslim states' confrontational approach towards resistance, noting that such an attitude lays pressure on all Muslim states and streams.

Tags: Palestinian Islamic Jihad Israel Occupation
Short Link rasanews.ir/201rBq
Share
0
Please type in your comments in English.
The comments that contain insults or libel to individuals, ethnicities, or contradictions with the laws of the country and religious teachings will not be disclosed