2019 to see more of peace as world leaders wish? 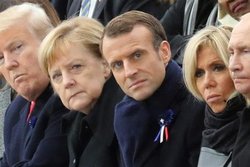 World leaders release a surfeit of mostly peace-themed New Year messages. The well-spoken statements once again raise the perennial question whether this year is to see more of the envisioned calm.

RNA - Russian President Vladimir Putin said, “We all have our own different expectations, but in general, we all want that our loved ones are healthy, that we have harmony at home, that our children bring us joy, that the world is peaceful.”

“Let's wish happiness for those close to us. Share warm words with our nearest and dearest,” he added.

German Chancellor Angela Merkel said, “Prosperity, safety and peace - we have to work towards this even at home,” but noted that the country also sought to broaden its military expenditure.

China’s head of state Xi Jinping expressed confidence that “China's sincerity and goodwill for maintaining world peace and promoting common development will not change," while cautioning, "As we open our eyes to look at the world, we are faced with huge changes, changes not seen in 100 years.”

US President Donald Trump asserted, “It’s going to be a great year…complicated but great,” boasting, “There has never been an administration, and I’m very proud of this, that has done more than the Trump administration in the first two years of office.”

The chief executive went on to exemplify, reminding, among other things, “We terminated the horrible, one-sided Iran nuclear deal…We moved our embassy to Jerusalem (al-Quds) in Israel. I promised that and I did it.”

The remarks came amid continued worldwide criticism of the very decisions. The first one was taken unilaterally and defied the international law as the deal has been ratified in the form of a United Nations Security Council resolution. The second one flew in the face of one of the most prominent demands of the Palestinians, who want the occupied holy city’s eastern part as the capital of their future state.

“Then you look at North Korea, we’re doing really well,” he also said of Washington’s rapprochement with Pyongyang.

Kim Jong-un of North Korea, however, could not sound as sure. "If the US does not keep its promise made in front of the whole world," Kim said, "we may be left with no choice but to consider a new way to safeguard our sovereignty and interests,” he said.

Observers say expectations of a more peaceful world put the peace-building onus on the US and other major arms manufacturers. Washington is the world’s biggest military spender, producer, and exporter as well as the prime source of arms to the parties waging the deadliest conflicts in the world, such as Saudi Arabia and Israel.

According to Press TV, French President Emanuel Macron trained his speech on the populace, saying he recognized the public anger in the country, but also suggested that the countrywide “Yellow Vest” rallies the country has been witnessing could be the work of unrepresentative people.

“That someone takes the right to speak in the name of the people, but which [people]? How? When? It is nothing but the spokesperson of a hateful mob," he said.

British Prime Minister Theresa May assigned the biggest share of her address to Brexit, assuring she has negotiated a deal that “delivers on the vote of the British people,” but acknowledged the 2016 referendum had been “divisive.”

Tags: 2019 World leaders Putin Trump
Short Link rasanews.ir/201rBb
Share
0
Please type in your comments in English.
The comments that contain insults or libel to individuals, ethnicities, or contradictions with the laws of the country and religious teachings will not be disclosed