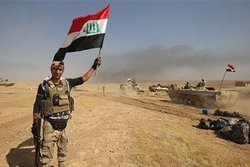 Syrian state media said that Iraqi forces can now attack ISIL targets inside Syria without getting approval from Damascus.

The Islamic State of Iraq and the Levant group (ISIL) declared a caliphate in 2014 after seizing large swaths of Syria and Iraq, establishing its de facto capital in the Syrian city of Raqqa.

However, the group has lost all of its strongholds and the vast majority of the territory it controlled since then, although thousands of its armed members are thought to remain in war-battered Syria.

According to Fars News Agancy, Iraqi warplanes and artillery have pounded ISIL positions inside Syria in the past, after getting the green light from Syrian authorities.

The group has been defeated in Iraq but still holds a small area in Syria close to the Iraqi border.

Tags: Iraq ISIL Syria
Short Link rasanews.ir/201rBP
Share
0
Please type in your comments in English.
The comments that contain insults or libel to individuals, ethnicities, or contradictions with the laws of the country and religious teachings will not be disclosed