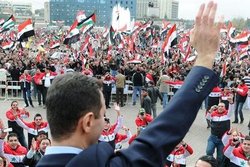 Leading British daily the Guardian says 2018 has ended on a note of triumph for the Syrian government amid the US decision to withdraw troops and a race among Arab states to restore ties with Damascus.

RNA - US President Donald Trump has announced a rapid troop withdrawal from Syria. The Guardian said the decision has “ended any potential threat originating from an indefinite American presence inside Syria’s borders.”

Last week, the UAE reopened its embassy in Damascus, which it had closed in 2011. Bahrain followed suit and other countries, including Kuwait, are expected to re-establish ties in the coming year. And the Arab League is reportedly poised to re-admit Syria, seven years after expelling it.

According to the Guardian, these developments come five months after the Syrian army made arguably its most consequential gain against terrorists since the foreign-backed war erupted, when it took control of Dara’a in the southwest.

Dara’a, the birthplace of foreign-backed sedition, had been the last stronghold of militants. Its return to the government fold removed any viable threat against the state, either politically or militarily, near the capital.

"Taken together, the military and diplomatic developments over the past six months leave no room for doubt: Assad has decisively won the conflict,” the Guardian wrote.

After the surrender of militants in the south, two regions had remained outside the government’s control and both were under the protection of foreign powers, namely Turkey in the north and the US in the east.

The two NATO countries had arrangements with Russia about operating in those zones to avoid confrontation, which meant that any further military advances had to be approved by Moscow.

Damascus and its allies saw these areas as sanctuaries for hostile forces that could become entrenched, and whose mandate could change to fighting the state.

"Trump’s sudden decision has ended that problem,” the Guardian said. The Syrian government "no longer faces the threat of an indefinite American presence in eastern Syria,” the paper said.

Last week, residents of Manbij appealed to the Assad government to retake the city near the Turkish border after the US withdrawal and by Friday Syria’s military had arrived at the frontline in the predominantly Arab town west of the Euphrates river.

Under the US protection, YPG militants used to control the city but Turkey is concerned about continued dominance of the Kurdish group near its borders.

Turkish officials have frequently stated that they would welcome a government takeover of YPG-controlled areas if that involved removing the militants from those areas. President Recep Tayyip Erdogan said on Friday that Turkey would have "no business in Manbij if the YPG terrorists leave”.

On the diplomatic front, the UAE proposed normalizing ties with Damascus in 2016, but that plan was snubbed by the Trump administration. According to the Guardian, senior Emirati officials began to refloat the idea of restoring ties with Assad earlier this year, encouraging its Saudi and Bahraini allies to do the same.

"The nature of this conflict, then, has changed drastically, with influential Arab countries now using their diplomatic capital to enable the regime to restore control over Syria," the paper said.

"Countries that once funded the opposition fighting against Assad are working hard to strengthen him in the hope that he becomes less reliant on their rivals,” it added.

Jordan has already reopened its borders with Syria, meaning that Damascus now has trade ties with all its neighbors except Turkey.

"Trump’s withdrawal has ended any potential threat originating from an indefinite American presence inside Syria’s borders. It has also effectively killed off any political challenge to Assad through the political process in Geneva – once an objective of the US presence in the country," the Guardian wrote.

"Restoration of ties with Arab neighbors will consolidate the military gains made over the past six months,” it added.

According to the Guardian, since the government took over Aleppo in late 2016, few have questioned Assad’s recovery, but until recently many still doubted his ability to re-emerge as a regional player with normalized relations with other countries.

"The past year now suggests that he has a real chance of doing just that. There will be many people in the region – and beyond – willing to help,” the paper said.

Tags: Guardian Syria Assad
Short Link rasanews.ir/201rBM
Share
0
Please type in your comments in English.
The comments that contain insults or libel to individuals, ethnicities, or contradictions with the laws of the country and religious teachings will not be disclosed