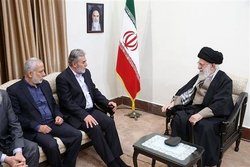 Leader of the Islamic Revolution Ayatollah Seyyed Ali Khamenei says Iran will never back away from supporting Palestine despite the heavy pressure from the world’s arrogant powers.

RNA - “These forces will never make us abandon our divine, sacred and rational responsibility,” Ayatollah Khamenei said as he received Secretary General of the Palestinian Islamic Jihad resistance movement Ziad al-Nakhala and his delegation in Tehran on Monday.

The Leader commended the Palestinian resistance against Israeli occupation forces as the main reason behind Palestine’s constant victories against the Tel Aviv regime over the past years and the key to more victories in future.

“As long as there is resistance, the Zionist regime’s downfall and demise will continue,” he said, assuring Palestinians that their final victory was “imminent.”

Noting that Palestine was on the path towards “greater victories,” the Leader said: “The main victory is that Palestinian people and resistance groups were able to bring the Zionist regime to its knees, a feat that Arabic armies could never accomplish.”

Ayatollah Khamenei then referred to the Israeli military’s latest failed attempt in taking on Palestinian resistance groups in Gaza Strip, which was met with an overwhelming response that forced the regime to call for truce after only two days.

“During the previous two wars, the Zionist regime called for truce after 22 days on one occasion and 8 days on another, but in the latest confrontation it requested a ceasefire after only 48 hours,” the leader explained. “This means the Zionist regime has been brought to its knees.”

According to Press TV, Nakhaleh, for his part, said Gaza maintains high levels of readiness to defend itself, as displayed over the recent months during the “Great March of Return” rallies that have strongly continued despite brutal crackdown by Israeli forces.

He also said Gazans were resisting US President Donald Trump’s so-called “deal of the century,” a backchannel plan to allegedly reach a peace settlement between Israel and the Palestinians by ending the resistance.

“Today, the Islamic resistance of Palestine is at the peak of its power and readiness, to the extent that Tel Aviv and all other Israeli towns and settlements will be within the reach of thousands of resistance missiles in case another war breaks out,” he concluded.

Tags: Ayatollah Seyyed Ali Khamenei Palestine Islamic Jihad
Short Link rasanews.ir/201rBK
Share
0
Please type in your comments in English.
The comments that contain insults or libel to individuals, ethnicities, or contradictions with the laws of the country and religious teachings will not be disclosed