Rasa – Serving the pilgrims of Imam al-Husayn during the days of Arba’in is an issue that has ‎crossed the geographical boundaries, such that people from various nationalities seek to ‎serve the pilgrims. ‎ 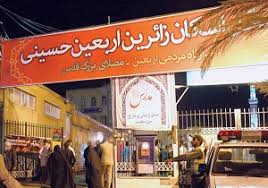 RNA – Every year, millions of sincere lovers of Imam al-Husayn travel to his holy shrine in ‎the holy Iraqi city of Karbala for the Arba’in pilgrimage. News and reports of the reception of ‎the Iraqi people for the pilgrims of Imam al-Husayn during the days of Arba’in have been ‎published in various news agencies. But it is also a fact that the people of Qom also enjoy ‎receiving the pilgrims and the people of this city have welcomed the pilgrims visiting from ‎different countries in the city’s Musalla (Prayer Hall).‎

According to Mr. Allahyari, the executive director of the international section of the ‎welcoming committee for the Arba’in pilgrims in Qom, said, “This year, pilgrims from various ‎countries such as Azerbaijan, Turkey, Pakistan and Afghanistan have come to Qom before ‎heading to Karbala, and they have been the guests of Lady Fatimah al-Ma’sumah.” ‎

The Musalla of Qom has taken on the current climate and atmosphere of Karbala. Just as on ‎the roads leading to Karbala, various booths have been established to meet the needs of ‎the pilgrims which give out free food, tea and even repair the pilgrims’ shoes. ‎

According to Mr. Allahyari, since the largest number of Arba’in pilgrims present in Qom are ‎Pakistani Shi’ahs, a booth for the preparation of Pakistani food has been established in the ‎Musalla and its cooks are Pakistani seminarians from al-Mustafa International University. ‎

Rasim also said that murder and killing news are more appealing to Western audiences but ‎news about religious events is unattractive to them.‎

Ismail noted that on the path toward Karbala, there are people who, despite being destitute, ‎sacrifice all their belongings to receive the pilgrims and added, “This is due to the culture of ‎generosity and sacrifice of Shi’ism, as well as the love of the Ahlul-Bayt. Shi’ahs have been ‎nurtured in this culture from the time they were children to sacrifice themselves and help ‎each other.”‎

Ismail added that followers of other religions and denominations also participate in the ‎Arba’in pilgrimage, including Sunnis and even Christians and said, “This pilgrimage is a ‎demonstration of love, something that is spoken about in Christianity, but is less seen in the ‎West today.”‎

Tags: karbala Arbain Imam Husayn Arba’in Qom Arba'een Arbaeen Husayn Imam Hussain
Short Link rasanews.ir/201qnA
Share
0
Please type in your comments in English.
The comments that contain insults or libel to individuals, ethnicities, or contradictions with the laws of the country and religious teachings will not be disclosed