Rasa - At least five civilians have lost their lives when the US-led coalition purportedly fighting the Daesh Takfiri terrorist group carried out an airstrike against Syria’s eastern province of Dayr al-Zawr. 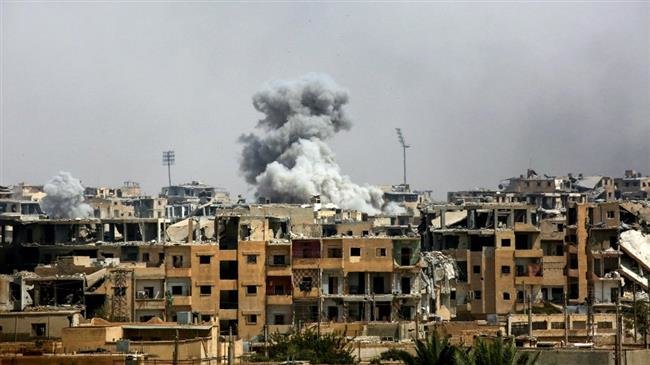 Speaking at the United Nations Security Council (UNSC) meeting in New York City on Friday, Syrian Ambassador to the United Nations Bashar al-Ja'afari said the US-led coalition “is targeting anything in Syria but not terror groups.”

“We are surprised that the UN Special Envoy to Syria (Staffan de Mistura) has ignored the crimes of this coalition against Syrian people. The illegal US-led international coalition continues to perpetrate crimes in Syria, the last of which was in the villages of al-Sousa and al-Bubadran, where 62 civilians lost their lives,” the Syrian UN ambassador pointed out.

The so-called Syrian Observatory for Human Rights said on October 23 that as many as 3,222 civilians had been killed ever since the so-called US-led anti-Daesh coalition launched its aerial bombardment campaign in Syria more than four years ago.

There were 768 people under the age of 18 among the fatalities in addition to 562 female victims.

The Britain-based monitoring group noted that the civilians were killed by US-led warplanes in Syria’s northern province of Raqqah, northeastern province of Hasakah, northwestern Aleppo and Idlib provinces as well as Dayr al-Zawr province in the country's east.

“In counterattacks since Friday to Sunday dawn, Daesh has taken back all positions to which the SDF had advanced inside the Hajin pocket,” the monitoring group’s chief Rami Abdel-Rahman said.

Unlike Daesh, “our forces don't know the area and can't move around in conditions of zero visibility,” an SDF commander, requesting not to be named, said.

The commander added, “Military reinforcements and heavy weapons have been sent to the front and some units will be replaced by more experienced ones.”

“We will launch a new military campaign as soon as those reinforcements have arrived,” he said.

According to Press TV, SOHR says more than 300 SDF militants and around 500 Daesh extremists have been killed in the past seven weeks of fighting.

The US-led coalition estimates that 2,000 Daesh terrorists remain in the Hajin area.

SDF militants, mainly active in the eastern part of the Euphrates River, are purportedly fighting against the remnants of Daesh, which has already been driven out of all its urban bastions both in Iraq and Syria.

However, the Damascus government regards the SDF as unwelcome armed forces occupying parts of Syrian territory without the consent of the central government.

Tags: US Syria
Short Link rasanews.ir/201qn3
Share
0
Please type in your comments in English.
The comments that contain insults or libel to individuals, ethnicities, or contradictions with the laws of the country and religious teachings will not be disclosed