Rasa - Iraq’s Hashd al-Sha’abi paramilitary forces have amassed on the country’s border with Syria after a massive Daesh attack on the other side of the border. 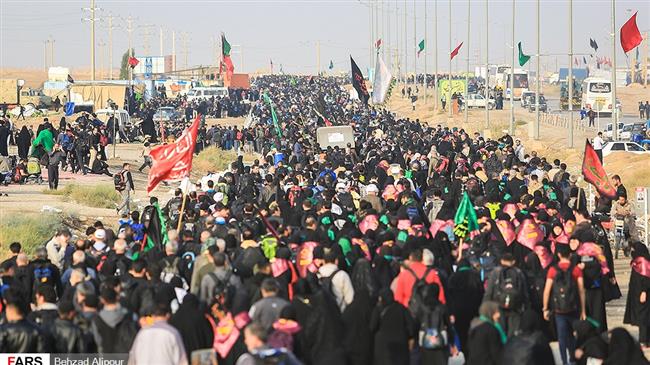 The attacks reportedly killed at least 60 members of the US-backed Syrian Democratic Forces (SDF), and wounded more than 100 other militants.

Daesh also said that it has captured some SDF-controlled areas in Syria over the past two days.

Hashd al-Sha'abi commander Qassem Moslih said the SDF retreat in the face of Daesh inroads had created a “void” on the Syrian side of the border.

Iraqi authorities are wary of infiltration by terrorist groups based in Syria, especially at a time when millions of pilgrims are on the move across the country to mark Arba'een in the holy city of Karbala.

On Saturday, the Hashd al-Sha'abi said it had downed 15 drones over Karbala for security reasons, using jamming systems which are stationed around the city.

The group asked reporters to refrain from flying unmanned aircraft during Arba’een rituals and coordinate such flights with related authorities.

Cities, towns and villages all over Iraq empty out during a 20-day period as their people take to the roads in an elaborately organized and well protected mass movement not seen anywhere else in the world.

Estimates vary of the total number of participants, some putting it as high as 17 million. Traveling from as far as Iran, Pakistan, Azerbaijan, Bahrain, Lebanon, Kuwait, Europe and America, the pilgrims will descend on Karbala on Tuesday.

According to Press TV, pilgrims walk in long columns stretching back unbroken for as long as 50 miles and sleep and eat in tents erected by supporters alongside roads.

The event has gained traction in recent years following the fall of the former Iraqi dictator Saddam Hussein and become an overwhelmingly powerful manifestation of belief and solidarity among Muslims.

“The message of this march to the world’s people is unity among Muslims and harmony in fighting oppression,” chief of Iran’s Islamic Revolution Guards Corps (IRGC) Maj. Gen. Mohammad Ali Jafari said Saturday.

He made the remarks as he visited one of the border crossings used by Iranians to travel to Iraq for the ceremonies.

Around two million Iranian pilgrims are taking part in the march this year, said head of Arba’een Headquarters Hossein Zolfaqari whose office coordinates the event.

The Arba'een rally is the largest annual gathering of people anywhere on earth and the journey, mostly on foot, is a sign of devotion to the ideals of Imam Hussein.

The Imam and his 72 companions were martyred in an unequal battle with the massive army of the tyrant of the time more than a dozen centuries ago.

The Battle of Karbala resonates strongly with the Muslim faithful due to the sacrifices made in order to keep Islam and the tradition of Prophet Muhammad (Peace be upon Him) alive.

Tags: Hashd Muslim Syria Arba'een Pilgrimage Iraq
Short Link rasanews.ir/201qmt
Share
0
Please type in your comments in English.
The comments that contain insults or libel to individuals, ethnicities, or contradictions with the laws of the country and religious teachings will not be disclosed