Rasa - At least 10 people have been killed in a fresh raid by Nigerian security forces on members of the country’s Shia Muslim community. 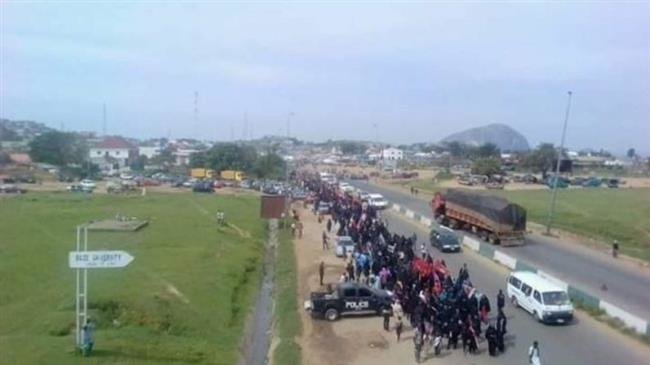 RNA - Report in local Nigerian media on Saturday said scores of people had also been injured after Nigerian security forces opened fire on Muslim worshipers gathering for a procession in Zuba, in Gwagwalada area of the capital Abuja.

Those killed in the attack were members of the Islamic Movement in Nigeria (IMN), a group that has been subject to a harsh government crackdown over the past three years.

Local media said the Muslim worshipers had gathered near Abuja from Suleja, in Niger state, for a three-day procession to commemorate the annual Arba’een occasion, which marks the 40th day since the death anniversary of Prophet Muhammad’s grandson.

They said police was forced to open fire on the Muslim worshipers after they refused to turn back from a checkpoint in Zuma, north of Abuja.

However, IMN said in an statement that it was the military that open fire without any provocation from the side of the marchers.

“The Movement vehemently condemns the action of the security agents, as unwarranted, since the march has been peaceful,” said the statement, adding, “In fact it the procession was being rounded up for the day, when soldiers opened fire on the peaceful marchers without any provocation whatsoever”.

An IMN spokesman alleged that police and security forces resorted to extreme violence, prompting marchers to hurl stones and rocks at soldiers to defend themselves.

Abdullahi Musa said that security forces even moved several of the bodies of the victims to a nearby police stations.

He said Shia Muslims in Nigeria, including those who gathered for the annual procession, will not be deterred by the crackdown.

“I want to assure you that we are not disturbed with this onslaught. The more they kill us, the more people are coming out to protest,” Musa told The Cable news website.

Nigeria’s crackdown on IMN followers began in December 2015 when the army attacked a religious ceremony in the city of Zaria in the northern Nigeria. Nigerian forces later raided the house of IMN leader Sheikh Ibrahim al-Zakzaky and arrested him after killing those attempting to protect the prominent Muslim cleric.

IMN sources said the group will go ahead with plans for “Arba’een Symbolic Trek” as of Sunday despite police refusal to allow them through the military checkpoint near Zuma motor park earlier in the day. The group expects that more than a million will turn up at the march.

Tags: Muslim Nigeria
Short Link rasanews.ir/201qms
Share
0
Please type in your comments in English.
The comments that contain insults or libel to individuals, ethnicities, or contradictions with the laws of the country and religious teachings will not be disclosed