Pittsburg attack likely deadliest one on Jewish community in US history: ADL

Rasa - Saturday's synagogue shooting in the US state of Pennsylvania is "likely the deadliest attack on the Jewish community in the history of the United States, " says an international Jewish non-governmental organization based in the United States. 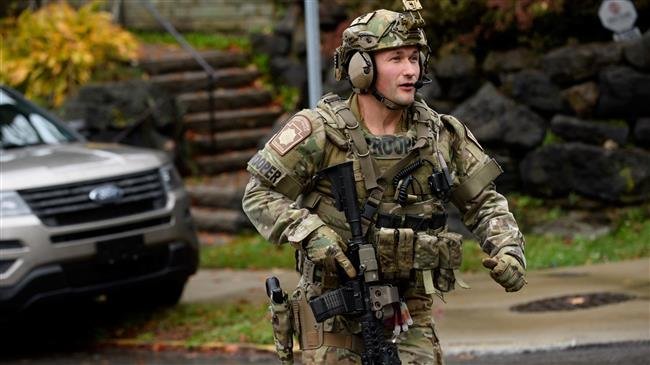 RNA - Anti-Defamation League (ADL) CEO Jonathan Greenblatt made the comment in a statement after the Pittsburgh attack caused 11 deaths and multiple injuries.

"Our hearts break for the families of those killed and injured at the Tree of Life Synagogue, and for the entire Jewish community of Pittsburgh," he wrote. "This is likely the deadliest attack on the Jewish community in the history of the United States. We are actively engaged with law enforcement to support their investigation and call on authorities to investigate this as a hate crime."

He further took the chance to portray the attack as evidence of rising anti-Semitism across the States.

“It is simply unconscionable for Jews to be targeted during worship on a Sabbath morning, and unthinkable that it would happen in the United States of America in this day and age," Greenblatt said. "Unfortunately, this violent attack – the deadliest anti-Semitic attack in the United States since 2014 – occurs at time when ADL has reported a historic increase in both anti-Semitic incidents and anti-Semitic online harassment. As we mourn those lost and search for answers, ADL will remain steadfast in its mission to fight anti-Semitism wherever and whenever it may occur… It looks definitely like it’s an anti-Semitic crime. That is something you wouldn’t believe could still be going on."

US President Donald Trump has also branded the attack as anti-Semitic.

“What happened today is a horrible, horrible thing," Trump told reporters after stepping off Air Force One in Indianapolis, Indiana. “It looks definitely like it’s an anti-Semitic crime. That is something you wouldn’t believe could still be going on."

According to Press TV, Robert Bowers, the suspect, reportedly shouted "all Jews must die" as he entered the Pittsburgh-area Tree of Life synagogue.

"This is one of the most horrific crime scenes I've ever seen," Pittsburgh Public Safety Director Wendell Hissrich told reporters.

An investigation has been launched to find out the motive of the suspect, who has previously spoken out against the Jewish community on social media.

"There is no place in America for violence or anti-Semitism," said Vice President Pence while speaking at an event in Las Vegas. "An attack on innocent Americans and an assault on our freedom religion… It was not just criminal, it was evil."

The attack was launched as races were heating up across the country ahead of the November midterm elections.

“We grieve for the Americans murdered in Pittsburgh. All of us have to fight the rise of anti-Semitism and hateful rhetoric against those who look, love, or pray differently. And we have to stop making it so easy for those who want to harm the innocent to get their hands on a gun,” said former US President Barrack Obama on Twitter.

Along with other Trump critics, Obama was himself targeted by a mail bomb recently.

Tags: US Synagogue Jewish
Short Link rasanews.ir/201qmq
Share
0
Please type in your comments in English.
The comments that contain insults or libel to individuals, ethnicities, or contradictions with the laws of the country and religious teachings will not be disclosed