Rasa - Saudi Arabia, which has been implicated in the killing of dissident journalist Jamal Khashoggi, claims that the kingdom is promoting the vision of "light" in the Middle East. 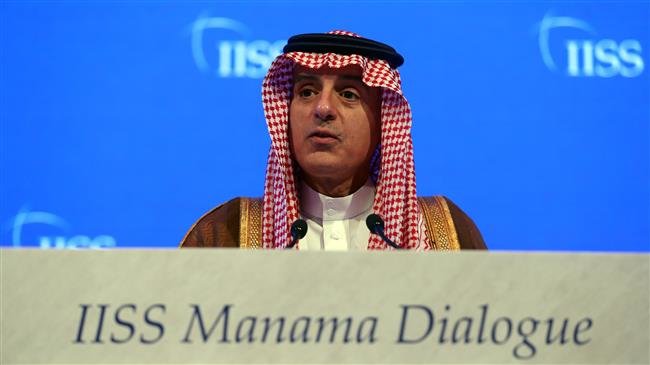 RNA - Speaking at a security summit in the Bahraini capital Manama on Saturday, Saudi Foreign Minister Adel al-Jubeir insisted that the regime was combating what he called Iran's vision of "darkness" in the region.

Over the past 50 years, he said, conflicts have led to two competing visions of "light" and "darkness" in the Middle East.

"We are now dealing with two visions in the Middle East. One is a (Saudi) vision of light... One is a (Iranian) vision of darkness which seeks to spread sectarianism throughout the region," he added.

The remarks came in defiance of global anger over Saudi Arabia's admission of Khashoggi’s murder at Riyadh's consulate in Istanbul.

Elsewhere in his remarks, Jubeir complained about what he described as media "hysteria" over Khashoggi's death.

"But unfortunately there has been this hysteria in the media about Saudi Arabia's guilt before the investigation is completed," he said.

The top Saudi diplomat also dismissed Turkey's calls to extradite 18 suspects in Khashoggi's murder, stressing that they would be prosecuted in the kingdom.

Jubeir further noted that an investigation is still ongoing into the case.

"We're trying to uncover what happened. We know that a mistake was committed, we know that people exceeded their authority and we know that we're investigating them," he said. "We will share the results of the investigation, we will hold people to account and those responsible will be punished, and we will put in place mechanisms to ensure that this doesn't happen again."

Touching on the fallout of Khashoggi's death, Jubeir said that Riyadh-Washington ties are "ironclad" and praised what he called the "rational, realistic" foreign policy of the administration of US President Donald Trump.

"The Kingdom of Saudi Arabia has been an ally of the Western countries since the beginning of the third Saudi state in the 1930s. This is not going to change," he said.

According to Press TV, Khashoggi, an outspoken critic of Saudi Crown Prince Mohammed bin Salman, vanished at Riyadh's consulate in Istanbul on October 2.

Riyadh initially claimed that the journalist had walked out of the mission.

Later, however, it said that Khashoggi was killed accidentally in a “fist fight” with a Saudi hit squad.

Most recently, the kingdom said that the killing of the Washington Post columnist was “premeditated” by Saudi operatives.

American lawmakers have called for sanctions against bin Salman or leading members of the Saudi royal family, but Trump intends to maintain close relations with the kingdom.

Tags: Jamal Khashoggi Saudi
Short Link rasanews.ir/201qmm
Share
0
Please type in your comments in English.
The comments that contain insults or libel to individuals, ethnicities, or contradictions with the laws of the country and religious teachings will not be disclosed