Rasa - Palestinian resistance movements in the besieged Gaza Strip have responded to Israel's most ferocious bombing in recent months with a barrage of rockets, triggering air sirens in several settlements. 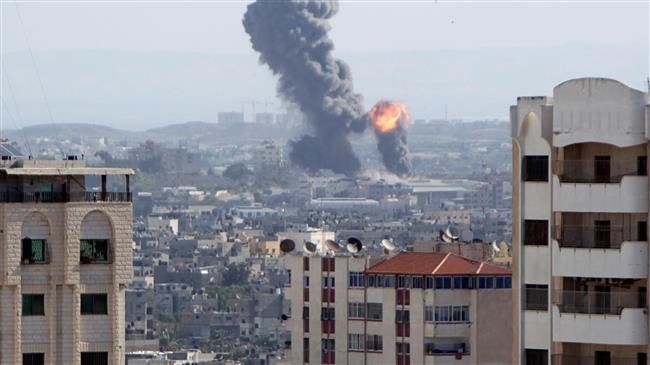 RNA - The rockets were fired as the Israeli military said it had attacked 80 "targets" in the coastal enclave following fresh protests near a fence where five Palestinians were shot dead.

The Palestinian Islamic Jihad, one of the resistance groups that operates in Gaza, said it had fired the rockets in retaliation for Israel's killing of the Palestinian protesters on Friday.

The Israeli military claimed that 13 out of the 34 projectiles, which were fired from Gaza over Friday night and Saturday morning, had been intercepted and the rest caused no damage or casualties.

Sirens were sounded almost a dozen times in the occupied areas adjacent to the Gaza Strip. The Israeli military said in a statement that it “views with great severity the rocket attack tonight against Israeli communities.”

"The rockets that were launched against Israel... we know that the orders, incentives were given from Damascus with the clear involvement of the Iranian Islamic Revolution Guards Corps' Quds Force," he said.

Israel has repeatedly attacked Syria under various pretexts, but not since Russia shipped its advanced S-300 anti-air missile defense system to Syria following the downing of a Russian aircraft during an Israeli aerial attack in the Arab country.

The fresh Israeli bombardment of Gaza came amid a deadly flare-up in violence in the coastal enclave.

Palestinian media reported that Israeli forces had killed five Palestinians and injured 232 others during Friday's anti-occupation demonstrations near the Gaza fence.

Ezzeddin al-Qassam Brigades, the military wing of the Hamas resistance movement, expressed its readiness to strike the occupied territories "with thousands of missiles."

"We appeal to the Palestinian people and announce to them that if the Zionist enemy attacks us, we will be ready for the battle. There is no place in occupied Palestine that our missiles will not reach," the group said in a statement.

According to Press TV, a spokesman for the Islamic Jihad said an Egyptian-mediated truce had been reached.

"After contacts between the Islamic Jihad leadership and the brothers in Egypt it was agreed that a comprehensive ceasefire will begin immediately," spokesman Daoud Shehab said.

"The Islamic Jihad will abide by the ceasefire if the occupation (Israel) does the same."

The Tel Aviv regime carries out regular attacks on Gaza under the pretext of hitting positions belonging to Hamas.

The coastal strip has been under a crippling siege since 2007 and witnessed three wars since 2008. It has also witnessed a fresh wave of tensions since March 30, which marked the start of “The Great March of Return” protests.

More than 200 Palestinians have so far been killed and over 20,000 others wounded by Israeli troops in the protests, according to the latest figures released by the Gaza Health Ministry.

Tags: Palestinian Israel Gaza
Short Link rasanews.ir/201qmj
Share
0
Please type in your comments in English.
The comments that contain insults or libel to individuals, ethnicities, or contradictions with the laws of the country and religious teachings will not be disclosed