Iran urges countries to abide by ICJ ruling against US

Rasa - Iran’s ambassador to the United Nations urges the international community to abide by an order issued by the International Court of Justice (ICJ) earlier this month against US sanctions on the Islamic Republic. 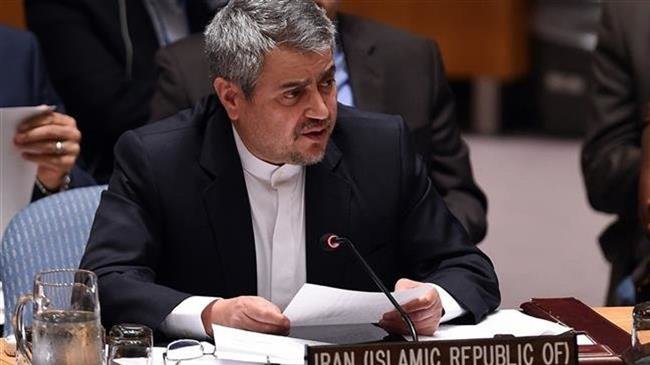 RNA - Addressing the UN General Assembly on Thursday, Gholamali Khoshroo called on the US "to implement the provisional measure, including refraining from measures such as wrongful sanctions which will aggravate the disputes."

"Moreover, to help preserve the primary role of the International Court of Justice as the principal judicial organ of the United Nations, other states are also expected to refrain from assisting the US in imposing any impediments in transactions involving specified items, which would amount to violation of the court’s order and would be tantamount to providing assistance to the wrongdoer," the Iranian envoy added.

On October 3, the UN’s top court issued a ruling, reprimanding the US over its re-imposition of sanctions on Iran and ordering Washington to lift restrictive measures linked to humanitarian trade, food, medicine and civil aviation.

The court's "unanimous order was a clear testament to the illegality of the US sanctions against our country and its people," the Iranian diplomat said.

Khoshroo also commended "the judges and all members of the court for their unwavering commitment and sense of duty in upholding the rule of law at the international level."

According to the verdict, Washington "shall remove by means of its choosing any impediments arising from the measures announced on May 8 to the free exportation to Iran of medicines and medical devices, food and agricultural commodities" as well as airplane parts.

The Hague-based court further said that sanctions on goods “required for humanitarian needs... may have a serious detrimental impact on the health and lives of individuals on the territory of Iran.”

According to Press TV, US sanctions on aircraft spare parts also had the “potential to endanger civil aviation safety in Iran and the lives of its users,” it added.

Referring to another set of US sanctions scheduled to take effect on November 4, the Iranian ambassador said they “would certainly amount to prohibited acts with an aggravating effect on the dispute at hand and would categorize as illegal wrongful acts contrary to the court’s dictum.”

The Hague ruling was announced more than two months after Iran complained to the ICJ in July that US President Donald Trump’s re-imposition of unilateral sanctions against Tehran following Washington’s withdrawal from the 2015 landmark nuclear agreement, known as the Joint Comprehensive Plan of Action (JCPOA), was in violation of the Treaty of Amity, a 1955 treaty between Iran and the US.

In response to the ICJ ruling, Washington announced it would quit the 1955 treaty, which had established economic relations and consular rights between Tehran and Washington at the time it was signed between the countries.

Iran also argued that the US had violated the terms of the JCPOA, endorsed by UN Security Council Resolution 2231, by unilaterally pulling itself out of the nuclear agreement. The International Atomic Energy Agency has verified on numerous occasions that Iran has abided by the terms of the JCPOA.

Tags: US Iran
Short Link rasanews.ir/201qmZ
Share
0
Please type in your comments in English.
The comments that contain insults or libel to individuals, ethnicities, or contradictions with the laws of the country and religious teachings will not be disclosed