Rasa - Human rights groups have demanded the British authorities to open up an investigation into the use of UK firm J.C. Bamford Excavators Limited's (JCB) equipment in Israel's crimes against Palestinians. 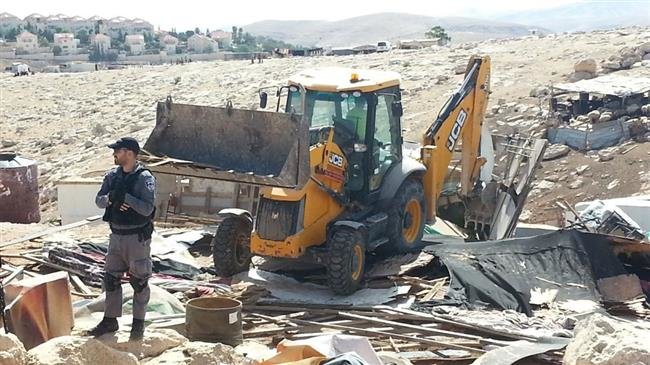 RNA - This month, the Palestinian village of Khan al-Ahmar in the occupied West Bank is due to be demolished by Israeli forces, in an action classed as a war crime under the statute of the International Criminal Court.

Human rights groups have condemned JCB for its role in the destruction of Palestinian villages including Khan al-Ahmar, which is set to be razed in the coming days.

London-based Lawyers for Palestinian Human Rights immediately wrote to UK Foreign Office minister Alistair Burt urging the government to intervene and charging that JCB’s involvement in the pending demolition of Khan al-Ahmar “may amount to aiding and abetting a war crime.”

Labour Party lawmaker Paula Sherriff raised the issue in Parliament, and Burt assured her that an investigation into the use of JCB machinery in the demolition of Khan al-Ahmar would be carried out.

Six years ago, the British campaign group War on Want published a report detailing Israel’s use of JCB machines to destroy Palestinian homes, mosques and olive trees and to build settlements in the West Bank, all of which are illegal under international law.

Since then, the use of JCB machines has been documented repeatedly during Israel’s violations of Palestinian rights.

Many European governments have a history of prioritizing trade with Israel over respect for international law and often fail to impose any form of sanctioning on Israel or on the companies that assist in apparent violations of Palestinians rights.

In August, Lawyers for Palestinian Human Rights also wrote to JCB asserting that “involvement in the demolition process of Khan al-Ahmar may amount to aiding and abetting the war crime of forcible transfer.”

According to Press TV, JCB has not responded to an invitation from the Business and Human Rights Resource Centre, a corporate accountability watchdog, to answer the allegations in the letter.

In the past, its vehicles have been used by the Israeli regime to build illegal Israeli settlements and by Israeli forces to destroy Palestinian homes, mosques and agricultural areas.

“The UN Human Rights Council has repeatedly stated that companies must terminate all business involvement in Israel’s illegal settlement activity”, says Ryvka Barnard, a senior campaigner on militarism and security at War on Want.

Companies such as JCB are “directly supporting the destruction of Palestinian homes and schools" and are "profiting from illegal activity – and in this case, war crimes.”

In response, Palestine solidarity activists have initiated a campaign in the UK to hold JCB accountable.

The campaign also called for boycotting JCB-branded shoes, toys, and batteries, and called on shops such as John Lewis, B&Q, and Argos to stop selling their products.

Tags: Israel British
Short Link rasanews.ir/201qmN
Share
0
Please type in your comments in English.
The comments that contain insults or libel to individuals, ethnicities, or contradictions with the laws of the country and religious teachings will not be disclosed