Rasa - US President Donald Trump has blasted Saudi Arabia’s efforts to hide the killing of dissident journalist Jamal Khashoggi in the kingdom’s diplomatic mission in Istanbul as the “worst cover-up ever,” but again indicated that he would not end arms sales to the Washington’s Middle East ally. 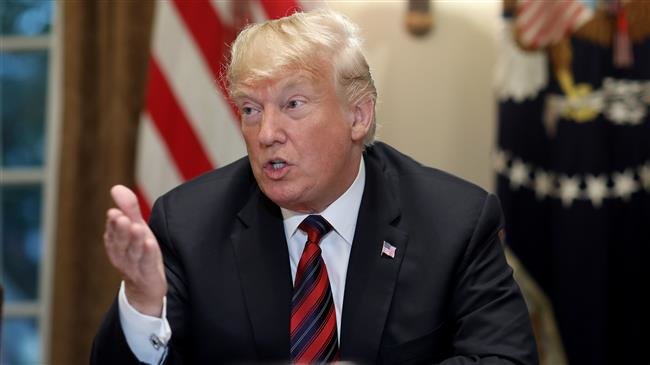 RNA - Khashoggi – a US resident, The Washington Post columnist, and a leading critic of Crown Prince Mohammed bin Salman – entered the Saudi consulate in Turkey’s Istanbul on October 2 to obtain documents for his pending marriage, but he never left the mission.

Saudi officials originally said Khashoggi had left the diplomatic mission unharmed, before announcing on October 19 that he had been killed inside the building in what they described as an altercation.

“They had a very bad original concept, it was carried out poorly and the cover-up was the worst in the history of cover-ups,” Trump told reporters at the White House on Tuesday. “They had the worst cover-up ever.”

The US president also expressed opposition to the idea of halting arms sales to Saudi Arabia, saying that Washington would be "hurting ourselves" if it turned away from Riyadh and refrained from going forward with arms sales to the kingdom.

Trump said he still looked for all the facts before making a final decision on whether to punish the Saudis and that he would continue to work with Congress on the issue.

Republican and Democratic lawmakers have thrown their support behind sanctions on the Saudi government in response to Khashoggi's case.

After more than two weeks of lies and denials, Riyadh claimed on Saturday that Khashoggi had died during a "brawl" inside the Saudi consulate in Istanbul.

Turkish President Recep Tayyip Erdogan dismissed on Tuesday the Saudis' account of Khashoggi's killing and said the 59-year-old had been murdered in a preplanned operation directed by top Saudi officials.

“The Saudi administration has taken an important step by admitting to the murder. From now on, we expect them to uncover all those responsible for this matter from top to bottom and make them face the necessary punishments,” Erdogan said in a speech in parliament.

“From the person who gave the order, to the person who carried it out, they must all be brought to account,” he added, stopping short of mentioning the Saudi crown prince who is suspected of having ordered the killing of the dissident journalist.

Earlier on Tuesday, US Vice President Mike Pence said the Saudi killing of the Virginia-based journalist “will not go without an American response” and that Gina Haspel, the CIA director, was in Turkey to review evidence in the case.

“I want to assure the American people: we’re going to get to the bottom of it. This brutal murder of a journalist, of an innocent man, of a dissident will not go without an American response and, I expect, without an international response,” Pence said at an event hosted by The Washington Post.

Calling the killing “barbaric,” Pence stressed that the US president would ultimately decide whether to impose economic sanctions on Saudi Arabia once all the facts were available.

Asked if Washington would sanction members of Saudi Arabia's royal family if they were found to have been complicit in Khashoggi’s murder, the US vice president said that was a decision for the American head of state.

Pence, however, stressed that whatever the US response to the murder case, the president will keep in mind the importance of relations between Washington and Riyadh.

Trump's comments on Tuesday came shortly before Secretary of State Mike Pompeo told reporters at a press conference that the US was revoking visas from Saudis involved in the Khashoggi's killing. He further noted that sanctions were also being considered.

The US State Department "will continue to seek all relevant facts, consult with Congress and work with other nations, and work to hold accountable those responsible for the killing of Jamal Khashoggi," Pompeo said.

According to Press TV, the State Department is working with the Department of Treasury to "review the applicability of global Magnitsky sanctions to those individuals," the US secretary of state said, vowing that the penalties "will not be the last word on this matter from the United States; we will continue to explore additional measures to hold those responsible accountable."

Under the Magnitsky Act, the assets of those individuals sanctioned by the US administration are frozen and they are barred from doing business with Americans or receiving US visas.

According to Press TV, Pompeo called the murder of the Washington Post columnist "ruthless," and described it as the silencing of the press.

The US secretary of state also noted that his country would continue a "strong partnership" with Saudi Arabia.

US State Department spokesperson Heather Nauert announced shortly after Pompeo's speech that the US had revoked the visas of or made ineligible for visas 21 Saudi nationals over Khashoggi's murder.

Tags: Jamal Khashoggi US Trump
Short Link rasanews.ir/201qm9
Share
0
Please type in your comments in English.
The comments that contain insults or libel to individuals, ethnicities, or contradictions with the laws of the country and religious teachings will not be disclosed