Rasa - Britain's top far-right Islamophobe Tommy Robinson has walked free from the court at the Old Bailey after a judge referred his case to the Attorney General. 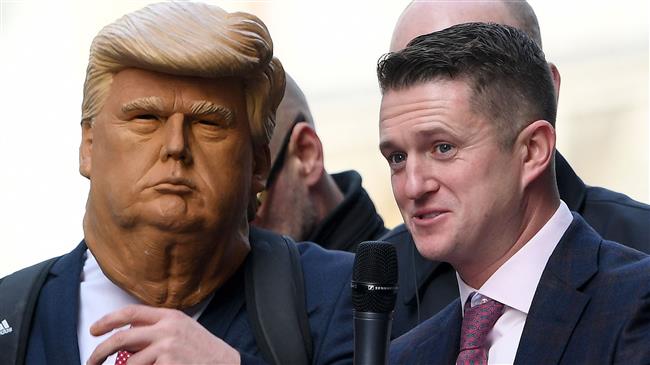 RNA - Robinson, whose real name is Stephen Yaxley Lennon, stood before Nicholas Hillard QC on Tuesday, having previously been jailed for committing contempt by filming individuals involved in a criminal trial before the trial had taken place.

In May 2017, Robinson had filmed four men outside of a court who were later convicted of raping a teenage girl.

Robinson, 35, was subsequently sentenced to thirteen months and ten months for contempt of court in May this year but has appealed both contempt rulings claiming that his live broadcasts outside of courts hearings contained information already in the public domain.

Three judges in an appeal court quashed the Leeds ruling, stating the judge in the initial court should not have commenced contempt proceedings resulting in Robinson’s release from prison. They also ordered that the case be reheard for allegations to be examined and, following a short appearance at the Old Bailey in September, the case had been adjourned until today.

However, at the Tuesday retrial, within minutes of Robinson’s appearance, Hillard referred the case to the Attorney General, Conservative MP Geoffrey Cox, claiming the case was too complicated.

“Cross-examination of Mr Yaxley-Lennon would be necessary for a proper examination of the allegations. All the evidence must be rigorously tested,” said Hillard.

“I think it necessary to look at quite a lot of the detail of what Mr Yaxley-Lennon said in the broadcast [featuring the alleged contempt] as to come to the overall picture as to what happened,” said the judge.

“I’m satisfied in the light of the issues as they now appear, as they emerged from the statement of yesterday, that cross-examination of Mr Yaxley-Lennon is necessary for a proper and thorough examination and resolution of the case that is in the public interest,” he added.

According to Press TV, Robinson, who has been jailed in the past for fraud, was granted bail but could find himself back behind bars if he is found to have breached the rules of court proceedings and prejudiced trials with contempt by publishing details of court cases on social media platforms.

The maximum sentence for contempt is two years imprisonment plus a fine. Laws around contempt of court are designed to ensure that free trials take place, and to avoid media trials.

Scores of supporters gathered outside the Old Bailey in Central London while Robinson addressed the crowd claiming that he should never have been jailed in the first place.

Robinson first rose to prominence after founding the "English Defense League" while anointing himself the group’s de facto leader.  Since leaving the group in 2013, Robinson claims to oppose ‘political Islam’ while his critics point out that Robinson frequently levels slurs at all Muslims and only focuses on grooming gangs and crimes where Muslims are perpetrators.

Recent figures show that far-right nationalism is the fastest growing threat to national security in the UK and that white people are the largest ethnic group of those committing terror offences.

Many believe that attacks on Muslims are growing more frequent as a result of surge in activity in the media by far-right figures like Tommy Robinson. They link hate attack like a recent one targeting the mosque in Cricklewood North London to media coverage of people like Robinson.

Tags: Islam UK
Short Link rasanews.ir/201qm4
Share
0
Please type in your comments in English.
The comments that contain insults or libel to individuals, ethnicities, or contradictions with the laws of the country and religious teachings will not be disclosed