Website for Saudi Business Conference Hacked with Images of Khashoggi

Rasa - The web page for the financial conference in Saudi Arabia is down Monday after apparently getting hacked with images of slain journalist Jamal Khashoggi being executed by the Saudi royal family. 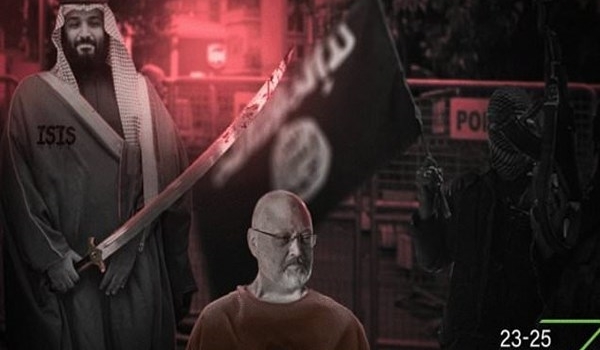 RNA - The incident comes a day before the Future Investments Initiative is set to begin — and after US business leaders and organizations have pulled out of the Riyadh summit in droves, The Hill reported.

Screenshots circulating on social media show a picture posted on the site of Crown Prince Mohammad bin Salman with a sword standing behind a kneeling Khashoggi, with a Daesh flag waving in the background.

“For the sake of security for children worldwide, we urge all countries to put sanction on the Saudi regime,” a caption read, noting that “the regime, aligned with the United States must be kept responsible for its barbaric and inhuman action, such as killing its own citizen Jamal Khashoggi and thousands of innocent people in Yemen”.

After weeks of denying any involvement in the disappearance of Khashoggi, who was last seen walking into the Saudi Consulate in Istanbul, the Saudi government now claims that the Washington Post columnist was killed as part of a rogue operation that MbS has distanced himself from.

But most international observers are skeptical of that explanation, and US lawmakers of both parties have criticized the Saudi government, with many calling for new Washington sanctions.

Media representatives for Future Investments Initiative did not immediately respond when contacted for comment.

Saudi Arabia's prominent investment conference dubbed Davos in the Desert is set to kick off in the capital Riyadh, though it's been overshadowed by Khashoggi's killing. The summit is scheduled to begin at 8 am (05:00 GMT) and the Saudi Arabia's Crown Prince is expected to attend. It is aimed at weaning the kingdom off oil revenues and fostering an economy powered by private investments.

Tags: Jamal Khashoggi Saudi
Short Link rasanews.ir/201qm0
Share
0
Please type in your comments in English.
The comments that contain insults or libel to individuals, ethnicities, or contradictions with the laws of the country and religious teachings will not be disclosed