More than 400 preachers will attend in Arbaeen Walking 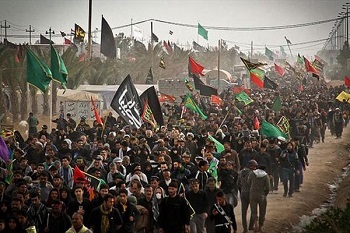 “Many mobile groups attending in this year Arbaeen walking have the duty of Commemorating the Imam Hussain`s Rituals, reminding the Mawkebs* to say their prayers on time and answering the religious questions and doubts” Ibrahimi said.

Noting that the numbers of the preachers who sent by Broadcasting and Education Center of Imam Hussain holy shrine increased to 400, Ibrahimi added “commemorating Congregational Prayer, teaching the religious beliefs to the pilgrims and adherence to the teaching of Ayatullah Sistani, are the important goals of this program”.

Arba'een or Arbain is a Shia Muslim religious observance that occurs forty days after the Day of Ashura. It commemorates the martyrdom of Husayn ibn Ali, the grandson of the Islamic prophet Muhammad, who was killed on the 10th day of the month of Muharram. Imam Husayn ibn Ali and 72 of his companions were killed by Yazid I's army in the Battle of Karbala in 61 AH (680 CE).

Tags: Arbaeen Walking Arbaeen Imam Hussain
Short Link rasanews.ir/201qlc
Share
0
Please type in your comments in English.
The comments that contain insults or libel to individuals, ethnicities, or contradictions with the laws of the country and religious teachings will not be disclosed