UN must act to stop Israel's violence against Palestinians

Rasa - The United Nations should take concrete action in order to stop Israel’s violence against Palestinians even if that requires some kind of military intervention, says an academic. 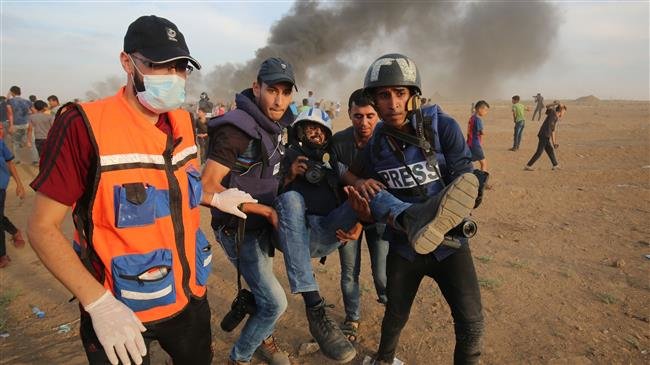 RNA - “In terms of the ability of the UN, the UN Human Rights Council has made 45 resolutions condemning Israel for its action, 45 resolutions and no action taken by the United Nations … I think we have to look at this in terms of the past 50 years rather than just the recent wars because if you look at the situation you can see that there has been actually an escalation of violence, an escalation of brutality by Israel on the Palestinians,” Kenneth Fero, lecturer at Coventry University said in an interview.

“I think there needs to be an immediate lift of the blockade for the people of Gaza, for the people of Palestine in general to get the support that’s being offered by many nations … Politically the situation is obviously much wider and much bigger but at the very least there should be condemnation internationally against what Israel is doing and action taken by the UN and if that requires some kind of military intervention then so be it,” he added.

The comments came after the United Nations Middle East envoy Nickolay Mladenov warned about the worsening conditions of Palestinians living in the Gaza Strip.

According to Press TV, the Gaza Strip has been under a crippling Israeli siege since 2007 and witnessed three wars since 2008. The Tel Aviv regime carries out regular attacks on Gaza under the pretext of hitting positions belonging to the Hamas resistance movement, which governs the territory.

The coastal sliver has also witnessed a fresh wave of deadly tensions since March 30, which marked the start of a series of protests demanding the right to return for the Palestinians driven out of their homeland.

More than 200 Palestinians have been killed and some 21,500 others wounded in renewed Gaza clashes, according to the latest figures released by the Gaza Health Ministry.

Tags: UN Palestinian Israel
Short Link rasanews.ir/201ql7
Share
0
Please type in your comments in English.
The comments that contain insults or libel to individuals, ethnicities, or contradictions with the laws of the country and religious teachings will not be disclosed