Rasa - Saudi Arabia has delivered a previously promised $100 million to the United States as Secretary of State Mike Pompeo landed in Riyadh to discuss the fate of dissident journalist Jamal Khashoggi, who went missing after visiting the kingdom’s consulate in Turkey’s largest city of Istanbul more than two week ago. 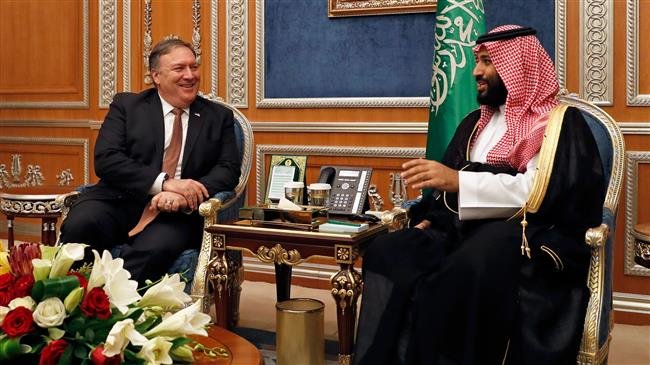 RNA - According to a New York Times report, the money landed in American accounts on Tuesday and was for purported American efforts to stabilize areas in Syria liberated from the clutches of the Daesh Takfiri terrorist group.

The timing of such payment, which the Riyadh regime had pledged to the Trump administration in summer, has raised cynical eyebrows among pundits.

“The timing of this is no coincidence,” an American official involved in Syria policy said on condition of anonymity.

This is while Brett H. McGurk, the US special envoy to the US-led coalition purportedly fighting Daesh, asserted that Pompeo's visit to Saudi Arabia and the $100 million payment were not connected.

“The specific transfer of funds has been long in process and has nothing to do with other events or the secretary’s visit,” McGurk said.

On Monday, US President Donald Trump co-signed Saudi Arabia’s Khashoggi cover-up, saying "rogue killers" could be responsible for the mysterious disappearance of the 59-year-old writer.

“I don't want to get into his mind, but it sounded to me like maybe these could have been rogue killers,” he added.

Turkish officials maintain that they have evidence that Saudi officials killed and dismembered Khashoggi, a columnist for The Washington Post, inside their consulate in Istanbul.

Saudi leaders have denied any role in the journalist’s disappearance but have not provided an obvious explanation of what happened to him.

Analysts say Saudi officials plan to blame Khashoggi’s killing on rogue elements, who allegedly acted on their own not on official orders in a desperate attempt to save the battered image of the kingdom and its Crown Prince Mohammed bin Salman.

Khashoggi’s fiancée Hatice Cengiz said he entered the consulate at around 1 p.m. local time (1000 GMT) on October 2, as she accompanied him but waited outside.

According to Press TV, the woman, who is a Turkish citizen, called police when Khashoggi did not emerge at 5 p.m., after the consulate had officially closed.

The Arab21 news website reported that the author paid a visit to the Saudi consulate in Istanbul late last month but was told by officials at the time to return at a later date to complete an application related to a family matter.

Khashoggi, a prominent commentator on Saudi affairs who writes for The Washington Post’s Global Opinions section, has lived in self-imposed exile in the US since September 2017, when he left Saudi Arabia over fears of the Riyadh regime’s crackdown on critical voices.

Tags: Jamal Khashoggi Pompeo Saudi
Short Link rasanews.ir/201qkk
Share
0
Please type in your comments in English.
The comments that contain insults or libel to individuals, ethnicities, or contradictions with the laws of the country and religious teachings will not be disclosed