Rasa - Rapporteur of the Iranian Parliament's National Security and Foreign Policy Commission Ali Najafi Khoshroudi underlined the need for taking practical measures by international bodies and world countries in the ongoing combat against terrorist groups in the Middle East region. 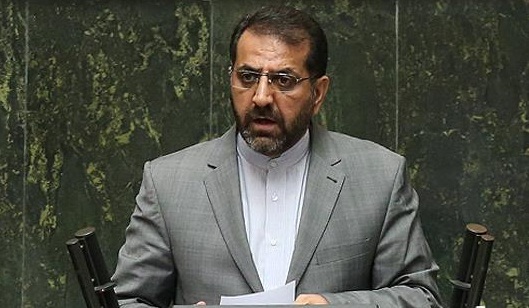 RNA - "Preventive mechanisms will allow countries to stop the emergence of terrorism and extremism at the national level," Najafi Khoshroudi said while stressing the important role of the parliaments in drawing up and approving relevant laws and proper punitive measures in this respect.

The senior Iranian lawmaker pointed to Iran’s contributions fight terrorism and terrorist groups, and pointed to Iranian President Hassan Rouhani’s proposal for the World Against Violence and Extremism (WAVE) resolution which was endorsed by the UN General Assembly, as well as the country's cooperation with Syria, Russia and Iraq in combating terrorism and extremism.

Najafi Khoshroudi underlined that Iran has played a prominent role in fighting terrorism and if it were not for Iran’s contributions, "today the ISIL terrorist group would have taken control of a large part of the Middle East region."

In relevant remarks on Tuesday, Iranian President Hassan Rouhani in a meeting with new Dutch Ambassador to Tehran Jacques Werner called on the European states to prosecute the terrorists living in Europe, including the masterminds of the recent terrorist attack in Southwestern Iran.

"Unfortunately, a number of individuals who have admitted responsibility for the terrorist attack (in Ahwaz) are living in Europe and we hope that the European countries adopt the necessary measures in this regard and undoubtedly, such a move will be highly effective in mutual confidence-building and more intimacy between the two sides," President Rouhani said during the meeting in Tehran.

He underlined the necessity for all-out campaign against terrorism, and said, "Today, terrorism is not only a big problem for the region but also a problem for the world and therefore, all states are necessitated to make serious efforts against it after understanding the dangers of this big problem."

Werner, for his part, submitted his credentials to President Rouhani, and said, "The Dutch government fully supports implementation of the 2015 nuclear deal and is determined to enhance banking ties with Iran, along with strengthening the EU's financial institutes, and does not allow the sanctions to leave negative impacts on economic relations between the two countries."

According to Fars News Agancy, he said that the Dutch government strongly condemns the terrorist attack in Southwestern Iran, and added, "We, in Europe, will also take action to chase the culprits behind the terrorist act."

26 people were killed and 69 others were wounded in an attack by al-Ahwaziya terrorist group, whose leaders live in a number of European states, during the nationwide military parades in the Southwestern city of Ahwaz on September 22.

The terrorists attacked the bystanders watching the annual Armed Forces' parades, marking the start of the Sacred Defense Week, commemorating Iranians' sacrifices during the 8 years of the Iraqi imposed war on Iran in 1980s, in disguise of the IRGC and Basij (volunteer) forces, killing and wounding several people, including innocent women and children.

General Hajizadeh announced later that the missile and drone strikes against the terrorist targets in Syria killed 40 ISIL commanders and smashed all targets.

Tags: Iran Terrorism
Short Link rasanews.ir/201qkg
Share
0
Please type in your comments in English.
The comments that contain insults or libel to individuals, ethnicities, or contradictions with the laws of the country and religious teachings will not be disclosed