Rasa - Israeli warplanes have carried out fresh aerial assaults on Gaza in yet another act of aggression against the blockaded coastal enclave, killing a Palestinian youth. 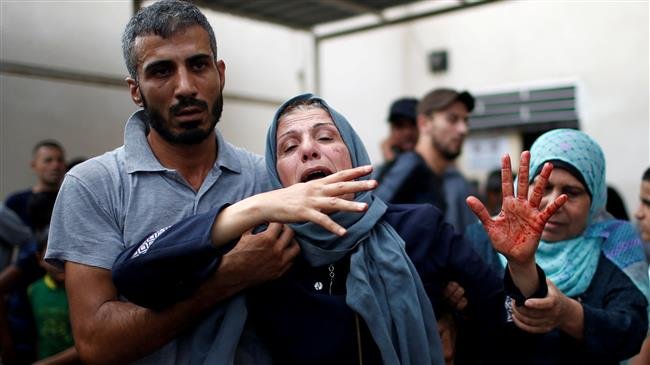 The Health Ministry in Gaza identified the victim as Naji al-Za'aneen, 25.

Separately on Wednesday, Israel closed both border crossings with Gaza amid rising tensions.

The Israeli army claimed in a statement that its fresh air raids came “in response to the rockets fired from Gaza” onto occupied territories overnight.

The claim was, however, rejected in a joint statement by Gaza-based Palestinian resistance groups.

It further said that one of the Gaza rockets had hit the city of Beersheba in the Negev Desert and the second had landed in the sea.

Meanwhile, a medical official told Israel Radio that three people had been taken to hospital with injuries after the alleged rocket attacks from Gaza.

The Israeli military ordered schools to remain closed in Beersheba on Wednesday. Studies were also delayed until 10 a.m. local time in areas near the Gaza Strip.

In a joint statement, however, Palestinian resistance groups denied any involvement in the alleged rocket fire from Gaza.

The groups vowed to continue Gaza protests until the Israeli siege on the Palestinian region would be terminated.

They also expressed their full preparedness to confront Israeli aggression against Palestinian s.

Palestinian Popular Resistance Committees Spokesman Abu Mujahid told al-Mayadeen TV channel that Israel is looking for pretexts to attack, and that resistance groups reserve the right to respond to the regime's assaults.

He also warned that there is a limit to the patience of Palestinian resistance groups.

The Tel Aviv regime carries out regular attacks on the blockaded coastal sliver under the pretext of hitting positions belonging to Hamas, the movement which runs the Palestinian territory.

The coastal strip has been under a crippling siege since 2007 and witnessed three wars since 2008. It has also witnessed a fresh wave of tensions since March 30, which marked the start of “The Great March of Return” protests.

According to Press TV, more than 200 Palestinians have been killed and some 21,500 others wounded in renewed Gaza clashes, according to the latest figures released by the Gaza Health Ministry.

On Tuesday, the Israeli minister of military affairs said that the regime must now decide if it is headed toward another war against Gaza.

Speaking during a visit to the Israeli army’s Gaza division headquarters, Avigdor Lieberman called on the so-called Israeli security cabinet to order a “strong blow” against Hamas “even at the price of moving to a wide-scale confrontation.”

“We have exhausted all other options in Gaza,” he said. “Now is the time to make decisions.”

“My opinion is very clear. We must land a strong blow against Hamas. That’s the only way to lower the level of violence to zero or close to zero,” he added.

Lieberman also claimed “persuasions and international cooperation” have failed to bring about a negotiated armistice in Gaza, leaving only the possibility of military action.

Tags: Palestinian Israel Gaza
Short Link rasanews.ir/201qkV
Share
0
Please type in your comments in English.
The comments that contain insults or libel to individuals, ethnicities, or contradictions with the laws of the country and religious teachings will not be disclosed