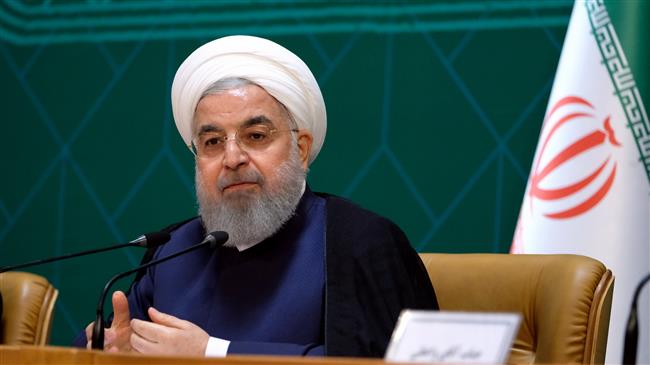 RNA - "Interference of other countries in domestic affairs of neighboring countries is not acceptable," Rouhani said in a meeting with Qatar's new Ambassador to Tehran Mohammed bin Hamad Al Hajri on Tuesday.

He added that Qatari officials are prudently managing the country's affairs, stressing that "no one has the right to make decisions for the Qatari people and government."

The Iranian president also said the two countries are determined to expand relations in all fields and added that closer ties between Tehran and Doha serve the interests of the two nations and the region.

He noted that the two countries have close stance on many regional issues but must further promote mutual bonds.

The Qatari ambassador, who submitted his credentials to the Iranian president, said Doha would make serious efforts to promote relations with Tehran to serve the two nations' interests.

"There are numerous capacities and grounds for the expansion of cooperation between Iran and Qatar in political and economic fields and there is no obstacle in the way of improving joint cooperation," Rouhani said.

All must try to preserve Iran nuclear deal: Rouhani

In a meeting with the new Dutch Ambassador to Tehran Jacques Werner, the Iranian president commended political stance of the European Union, particularly the Netherlands, on the historic nuclear agreement, officially known as the Joint Comprehensive Plan of Action (JCPOA), signed between Iran and the P5+1 group of countries in 2015."Everyone must make efforts to well protect and safeguard this very important and international agreement," Rouhani said.

US President Donald Trump announced in May that Washington was pulling out of the nuclear agreement which lifted nuclear-related sanctions against Tehran in exchange for restrictions on Tehran's nuclear program.

The deal had been signed between Iran and the five permanent members of the UN Security Council -- the United States, Britain, France, Russia and China -- plus Germany in 2015.

According to Press TV, Rouhani also expressed Tehran's keenness to expand relations with Amsterdam in all fields, particularly in economic and banking sectors.

He further stressed the importance of a severe fight against terrorism by all countries and said, "Today, terrorism has turned into a big problem not only for the region but to the world."

The Dutch ambassador, who submitted his credentials to President Rouhani, said his country completely supports the preservation of the JCPOA and is determined to promote banking relations with Iran.

Today, I offered my credentials to the President of #Iran, @HassanRouhani. It was a memorable event. I am now ‘fully fledged’ and can start spreading my wings here. @Rouhani_ir pic.twitter.com/ROtEALqtiP
— Jacques Werner (@JacquesWerner) October 16, 2018

Despite Washington's withdrawal, Iran has not left the deal yet, but stressed that the remaining signatories to the agreement now had to work to offset the negative impacts of the US pullout for Iran if they wanted Tehran to remain in it.

Other parties to the JCPOA have repeatedly announced that the deal is working and should stay in place.

Back in September, remaining parties to the Iran nuclear deal promised to establish a ‘special purpose vehicle’ to facilitate payments related to Iran’s exports as part of efforts to salvage the JCPOA after the US withdrawal.

Tags: Iran Rouhani Persian Gulf
Short Link rasanews.ir/201qkM
Share
0
Please type in your comments in English.
The comments that contain insults or libel to individuals, ethnicities, or contradictions with the laws of the country and religious teachings will not be disclosed