Rasa - Lieutenant Commander of the Islamic Revolution Guards Corps Brigadier General Hossein Salami underlined the Iranian Armed Forces' capability to ruin the enemy targets in any place and any time. 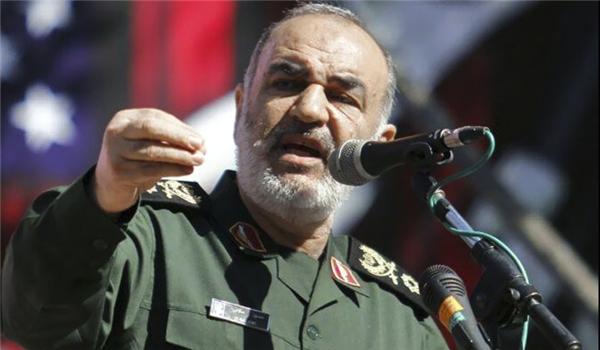 RNA - "The US threats in recent years have yielded no results but making Iran more powerful. We have grown into a big power in a way that today, we can destroy enemy's interests anywhere and give response at any level," General Salami said, addressing a ceremony in the Western city of Yasouj on Tuesday.

"We have defeated the enemy in psychological, economic, political, security, cultural and ideological wars and we have established a major front against the US," he added.

General Salami said that enemies have posed all types of threats and pressures against Iran, but to no avail.

In relevant remarks last Sunday, General Salami underlined that the IRGC's recent missile strikes on ISIL terrorists in Syria was a stern warning to the enemies of Iran.

The Islamic Revolutionary Guard Corps is fully ready to fight any enemy at any scale, Salami said, addressing a ceremony in the Central city of Qom.

He added that great victories had been achieved in recent days and the roar of IRGC missiles gave a strong warning to the enemies of the Islamic Republic.

General Salami also said that the US was being isolated in the world and was losing its allies, while Iran was at the heart of region’s political developments and could not be isolated.

Today, all the world is uniting against the US and no country helps it with its measures against Iran, added the commander.

The IRGC in response to the September 22 terrorist attacks in Southwestern Iran launched drone and missile strikes on ISIL strongholds in Eastern Syria on October 1.

The terrorists attacked the bystanders watching the annual Armed Forces' parades, marking the start of the Sacred Defense Week, commemorating Iranians' sacrifices during the 8 years of the Iraqi imposed war on Iran in 1980s, in disguise of the IRGC and Basij (volunteer) forces, killing and wounding several people, including innocent women and children.

Tags: Hossein Salami IRGC Iran
Short Link rasanews.ir/201qkJ
Share
0
Please type in your comments in English.
The comments that contain insults or libel to individuals, ethnicities, or contradictions with the laws of the country and religious teachings will not be disclosed