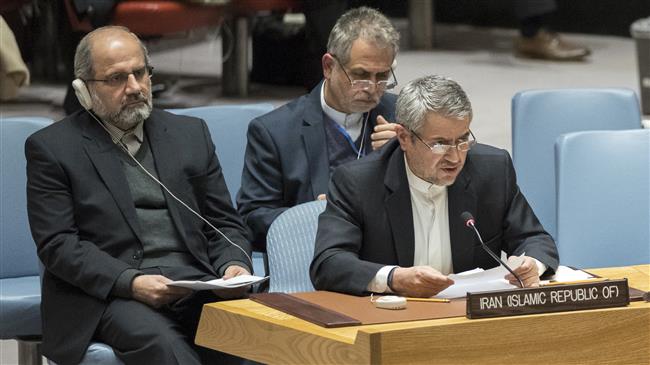 RNA - Gholamali Khoshroo on Monday regretted that the US “is addicted to sanctions” and sees it “as a tool in its toolbox in pursuance of its own national interests.”

“The morally wrong and ethically unjustified unilateral measures not only defy the rule of law at the international level but also infringe upon the right to development and lead to the violation of basic human rights,” Khoshroo said.

The Iranian envoy further noted that Tehran welcomes a report by the Special Rapporteur on the negative impact of unilateral coercive measures on the enjoyment of human rights, particularly where it says unilateral sanctions, aggravated by secondary sanctions seeking the “economic isolation” of the target country, amount to discrimination against the innocent population of the country concerned.”

“Coercive measures often lead to collective punishment of innocent civilians and violation of human rights,” he noted, blasting the US’ measures against the Islamic Republic, which have hit innocent civilians on the contrary to what American officials claim.

According to Press TV,  US President Donald Trump announced in May that Washington was pulling out of the nuclear agreement which lifted nuclear-related sanctions against Iran in exchange for restrictions on Tehran's nuclear program.

The US administration reintroduced the previous sanctions while imposing new ones on the Islamic Republic. It also introduced punitive measures — known as secondary sanctions — against third countries doing business with Iran.

A first round of American sanctions took effect in August, targeting Iran's access to the US dollar, metals trading, coal, industrial software, and auto sector. A second round, forthcoming on November 4, will be targeting Iran’s oil sales and its Central Bank.

Khoshroo also took a swipe at Washington’s use of threats against other countries as a tool of foreign policy, saying that the manifestation of the ‘surprising’ trend can even be traced in the UN.

“Threatening to cut financial aid to those countries who voted in favor of a UN resolution or warning them against the possible consequences of their vote in the General Assembly by saying ‘the US taking the names’ is just one example of visible offense to the UN principles,” he said.

“One thing is clear. This trend is weakening the organization, not strengthening it, and runs counter to the very objective of the Charter Committee establishment,” Khoshroo warned.

He also lashed out at the US’ “total disregard to Article 25 of the UN Charter," saying that “a permanent member of the Security Council is not only violating UNSC Resolution 2231 for the first time in the history of the UN, but also engaging in penalizing nations across the entire world for abiding by that resolution.”

Tags: Khoshroo US Iran
Short Link rasanews.ir/201qkG
Share
0
Please type in your comments in English.
The comments that contain insults or libel to individuals, ethnicities, or contradictions with the laws of the country and religious teachings will not be disclosed