Rasa - Israel soldiers have wounded dozens of Palestinians who had held a protesting rally along the northern coast of the besieged Gaza Strip in a bid to break the decade-long blockade on the impoverished sliver. 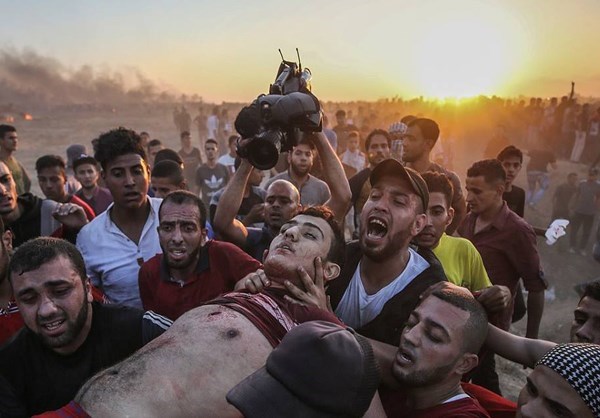 RNA - Hundreds of peaceful protesters had gathered in the area on Monday afternoon while dozens of others participated in a boat protest setting off from the Gaza seaport against the siege, but Israeli navy fired rounds and tear gas canisters at both groups.

According to a brief statement by Gaza Health Ministry, at least 60 people were wounded in the raid near the maritime border with the occupied territories, 24 of whom by live bullets.

Furthermore, Israeli military boats opened fire on ambulances and medics, who had rushed to help the wounded, other reports said.

The demonstration on Monday was the 12th naval march, with the participation of 25 fishing boats, against the crippling blockade of the enclave.

In August, the Palestinian Union of Agricultural Work Committees (UAWC) announced in a report that Israeli attacks against Palestinian fishermen in the Gaza Strip prevent “fishermen from practicing their fishing work and accessing their livelihood resources.”

Israel imposed a limit of three nautical miles on fishing in the waters off the Gaza shore until August 2014, when Palestinian fishermen were allowed to go out six miles.

Back in July, however, Israel reduced the fishing area to only three nautical miles as part of punitive measures against Gazans over the launch of incendiary balloons from the Palestinian coastal sliver into the occupied territories as part of ongoing protests against the decades-long Israeli occupation.

Over the past few years, Israeli troops have carried out over a hundred assaults on Palestinian boats, arresting dozens of fishermen and confiscating several boats.

According to Press TV, Israel has imposed movement restrictions on the Gaza Strip since the early 1990s. Restrictions intensified in June 2007 when Israel imposed a land, sea and air blockade on Gaza, citing security concerns.

Around two million Palestinians in Gaza remain locked in and are prevented from having free access to the remainder of Palestine and the outside world. The blockade has also undermined the living conditions in the coastal enclave and fragmented its economic and social fabric.

Tensions have been running high near the fence, separating Gaza from the occupied territories, since March 30, which marked the start of a series of protests dubbed “The Great March of Return.” Palestinian protesters demand the right to return for those driven out of their homeland.

The deadly clashes in Gaza reached their peak on May 14, the eve of the 70th anniversary of Nakba Day, or the Day of Catastrophe, which coincided this year with Washington's relocation of the US embassy from Tel Aviv to occupied Jerusalem al-Quds.

More than 200 Palestinians have so far been killed and over 20,000 others wounded in the renewed Gaza clashes, according to the latest figures released by the Gaza Health Ministry.

Tags: Palestinian Israel
Short Link rasanews.ir/201qju
Share
0
Please type in your comments in English.
The comments that contain insults or libel to individuals, ethnicities, or contradictions with the laws of the country and religious teachings will not be disclosed