Myanmar Buddhists rally to support military in crimes against Rohingya

Rasa - Myanmar’s extremist Buddhists rally in Yangon to voice support for the military’s state-sponsored crackdown campaign against Rohingya Muslims, vowing to “fight back” any international attempt to bring their top generals to justice for the crimes they perpetrate against the country’s unwanted minority community. 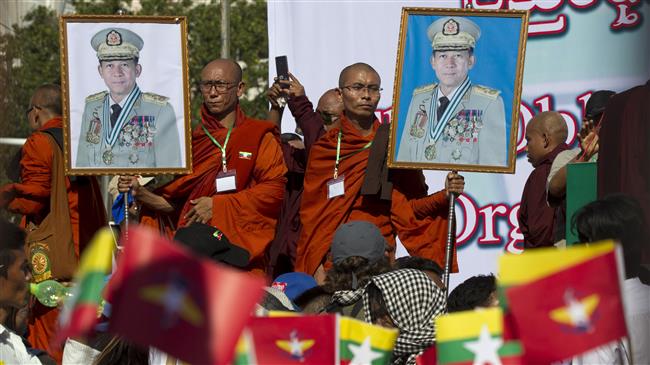 RNA - Several thousand anti-Muslim and pro-military Buddhists marched through Yangon on Sunday, holding portraits of Myanmar’s military chief, General Min Aung Hlaing, who has been referred by the UN to the International Criminal Court (ICC) for prosecution over actions that could amount to genocide and crimes against humanity during the crackdown he has been leading against Rohingya Muslims.

The campaign – which the UN described as the textbook example of ethnic cleansing campaign – has seen mass killings, torture, and gang rape of Rohingya Muslim as well as arson attacks against their homes and farms in Rakhine.

Rohingya trace their presence in Rakhine back centuries, but most people Buddhist- majority Myanmar see them as unwanted immigrants from Bangladesh, with the state denying the Muslims citizenship.

Since August 2017, around 700,000 Rohingya Muslims have fled their villages and crossed the border into Bangladesh, where they live in overcrowded camps with limited access to food, medicine and education.

Sunday’s rally was staged weeks after the UN’s fact-finding mission singled out Myanmar’s military chief and five fellow senior generals in a report on the Rohingya crackdown case, and said they should be prosecuted at the ICC for committing the gravest crimes under international law against the Rohingya “with genocidal intent.”

A month later, the ICC’s chief prosecutor announced in September the launch of an inquiry into the Myanmar military’s actions, which led to the deportations of hundreds of thousands of Rohingya Muslims into Bangladesh.

The Hague-based intergovernmental ICC serves as a court of last resort, which intervenes whenever national authorities are unable or unwilling to prosecute alleged crimes.

The participants in Sunday’s demonstration appeared to be echoing the military chief’s angry remarks last month that the UN had no “right to interfere in” what he described as Myanmar’s domestic affairs.

During the rally, one of the speakers, reading from a prepared statement, said that “the people of Myanmar strongly denounce and condemn any intervention or intrusion by the foreign countries, international communities and various organizations which unrightfully manipulate our nation and our Myanmar armed forces.”

A Buddhist monk, Wirathu, who was also addressing demonstrators, urged the international community to stay out of what he called Myanmar’s national affairs.

The Southeast Asian country is not a member of the ICC, but the membership of neighboring Bangladesh – which is bearing the brunt of Myanmar’s crackdown -- is enough basis for the court’s jurisdiction over the case, the tribunal says.

According to Press TV, the Myanmarese government has blocked access to the ground zero of the violence, but massive evident have so far been collected by international observers, medics, and journalists have blown the lid of the crimes.

The results have brought Myanmar’s de facto leader and onetime “democracy icon” Aung San Suu Kyi under fire for inaction, with critics saying she is effectively giving the green light to the army to keep up its criminal deeds by remaining tight lipped.

When UN report released in August, many even expected that it would lead up to the Nobel committee withdrawing the Peace Prize awarded to her back in 1991.

The Norwegian committee, however, argued that the prize had been awarded for achievements of the past and could not be therefore withdrawn.

Tags: Muslim Buddhist Myanmar
Short Link rasanews.ir/201qjj
Share
0
Please type in your comments in English.
The comments that contain insults or libel to individuals, ethnicities, or contradictions with the laws of the country and religious teachings will not be disclosed