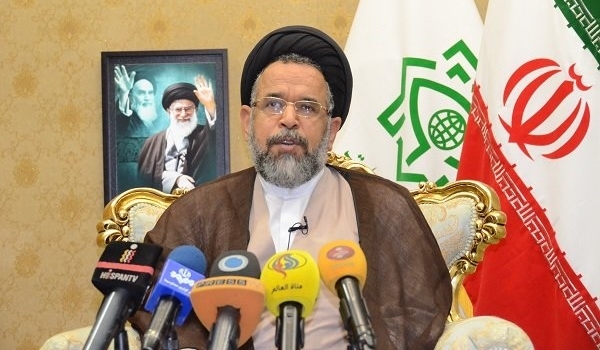 RNA - The ministry has so far eliminated 300 terrorist groups inside the country, killing hundreds of their members, Alavi said, addressing a ceremony in Tehran on Sunday.

According to the intelligence ministry, Iranian security forces disband dozens of terrorist teams, sponsored by some regional and trans-regional states, every year.

"The IRGC's Quds Force killed four members of a terrorist group during clashes near the city of Saravan (Sistan-Balouchestan province) in the Southeastern border with Pakistan," the IRGC said in a statement.

The statement noted that a considerable amount of weapons, ammunition and telecommunication equipment were seized from the terrorists after the team was dismantled.

Commander of the Islamic Revolution Guards Corps Ground Force Brigadier General Mohammad Pakpour warned last month that the IRGC would give a crushing response to any move by the terrorist groups, adding that his forces would even chase the terrorists to their hideouts outside Iran's borders.

According to Fars News Agancy, he added that 12 members of a team of PJAK terrorists who had martyred 11 Iranian border guards in Marivan were killed in Kermanshah province early last year, while many more were hunted down in other parts of Northern and Northwestern Iran.

Alavi said in September that the country's security forces had disbanded two terrorist teams in the western parts of Iran.

"The terrorist outfits were affiliated to hostile countries and arrested through intelligence operations," he added.

Tags: Iran Alavi Intelligence
Short Link rasanews.ir/201qjg
Share
0
Please type in your comments in English.
The comments that contain insults or libel to individuals, ethnicities, or contradictions with the laws of the country and religious teachings will not be disclosed