Rasa - Syria has endorsed a legislation that forbids Muslim preachers from "stoking sectarian strife" as the Arab country's fight against foreign-sponsored Takfiri terrorist groups is drawing to a close. 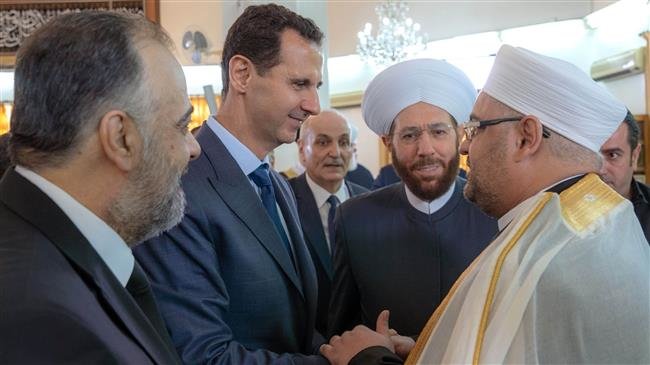 RNA - President Bashar al-Assad signed into law the new bill expanding the powers of the Ministry of Awqaf (Religious Endowments), which oversees Islamic affairs in Syria.

The legislation prohibits Muslim clerics from "taking advantage of religious platforms for political purposes," but non-Muslim communities are not affected by the law.

Under the new measure, the Syrian Awqaf minister is tasked with appointing the Grand Mufti, whose term is renewable every three years. Previously, he was named by the president for an unlimited term.

It further bans Muslim imams from traveling abroad or attending conferences even inside Syria without the Awqaf minister's permission.

"This is the first time there's a law that issues controls and standards for religious work and conditions for appointing imams and preachers," he said.

The new legislation is meant to regulate religious discourse in a bid to confront Takfiri extremism, which is a trademark of many terror outfits wreaking havoc in Syria.

The concept is largely influenced by Wahhabism, the radical ideology dominating Saudi Arabia and freely preached by Saudi clerics.

Riyadh is widely believed to be a key sponsor of the Takfiri terrorists, who have been operating to topple the Syrian government since 2011.

Tags: Muslim Cleric Syria
Short Link rasanews.ir/201qjZ
Share
0
Please type in your comments in English.
The comments that contain insults or libel to individuals, ethnicities, or contradictions with the laws of the country and religious teachings will not be disclosed