Rasa - Pressure is building on the Riyadh regime amid reports of its role in the disappearance and suspected murder of a dissident journalist, with Human Rights Watch (HRW) urging Saudi allies, including the US and the EU, to reconsider their ties with Crown Prince Mohammed bin Salman -- who is reported to have ordered an “operation” against his critic. 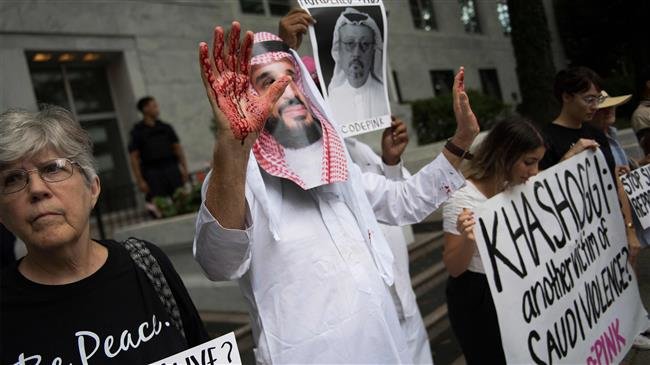 RNA - In a statement on Thursday, the New York-based rights group said bin Salman should “immediately release all evidence and information” in Riyadh’s possession regarding the fate of Jamal Khashoggi, who has not been seen or heard of after entering Riydah’s consulate in Istanbul, Turkey, last week, for some paperwork regarding his divorce.

Footage captured by a security camera outside the mission showed Khashoggi, a Washington Post columnist based in the US, setting foot in the diplomatic mission on October 2.

Khashoggi, however, never left the mission as his financée -- who was waiting outside -- told the police. No footage of his exit is also available.

There is widespread speculation – especially among Turkish officials -- that Khashoggi has been assassinated by Saudi operatives upon entering the place. His remains are also reported to have been flown out of Turkey in two jets by the 15 operatives.

Riyadh denies being behind Khashoggi’s disappearance, but it has so far failed to provide any evidence.

The HRW’s call came hours after The Washington Postimplicated bin Salman in the incident, and said the heir to the Saudi throne had personally ordered an “operation” aimed at luring Khashoggi back to the kingdom and then detaining him.

The American daily cited US intelligence intercepts of Saudi officials discussing the matter in the report.

“There is a mountain of evidence implicating Saudi Arabia in the enforced disappearance and potential murder of Jamal Khashoggi, and as the days go by, Saudi Arabia’s fact-free denials are becoming indictments in and of themselves,” said Sarah Leah Whitson, Middle East director at Human Rights Watch.

“If Saudi Arabia is responsible for Khashoggi’s disappearance and possible murder, the United States, United Kingdom, European Union, and other Saudi allies need to fundamentally reconsider their relationship with a leadership whose behavior resembles that of a rogue regime.”

The HRW also called for an end to arms sales to the Saudi regime, which has been engaged since early 2015 in a bloody military campaign against Yemen under the direction of bin Salman, who is also the Saudi defense minister.

The organization had earlier called for international sanctions against bin Salman for crimes against Yemeni people.

The rights institution’s Middle East director further cast doubt on Riyadh’s sincerity in its offer to join an investigation into the case and said, “Saudi Arabia’s goal is fact obscuring, not fact finding, and they should be made to face serious consequences.”

“Given that Saudi Arabia will not provide any evidence about Khashoggi’s movements in and out of the consulate, they cannot be trusted to conduct a genuine – far less effective – investigation,” she said.

According to Press TV, Turkish investigators are now preparing to enter the Saudi consulate.

Riyadh’s allies have already been pressing the kingdom over Khashoggi’s case over the past days.

“We expect a full-out investigation and full transparency from Saudi authorities on what happened,” said the top EU diplomat.

In London, the UK foreign secretary also warned Thursday that Saudi Arabia would face “serious consequences” if suspicions of Khashoggi’s murder turned out to be true.

“People who have long thought of themselves as Saudi's friends are saying this is a very, very serious matter,” Jeremy Hunt told AFP, adding, “If these allegations are true, there will be serious consequences because our friendships and our partnerships are based on shared values.”

Meanwhile, the chairman of the US Senate Foreign Relations Committee said Thursday that the Saudi government would have to be slapped with the “highest levels” of sanctions should it be found guilty in the case.

“If it turns out to be what we all think it is today but don’t know, there will have to be significant sanctions placed at the highest levels,” Republican Senator Bob Corker said.

US President Donald Trump, however, said earlier in the day that “it would not be acceptable to me” to block arms sales to Saudi Arabia in response to the disappearance last week of a Washington Post columnist.

Tags: HRW Saudi
Short Link rasanews.ir/201qis
Share
0
Please type in your comments in English.
The comments that contain insults or libel to individuals, ethnicities, or contradictions with the laws of the country and religious teachings will not be disclosed