Much of the prosperity of England was built on slavery

Rasa - A political analyst based in London says UK Labour leader Jeremy Corbyn is right in his call for expansion of education programs to include more facts about Britain’s colonial past, saying people and children have the right to know that their country was built on slavery. 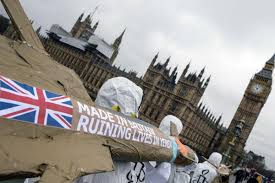 RNA - “The slavery is only one aspect of English history. It’s a very bad episode. Britain was the center of slave trade for 500 years... much of the prosperity of England was built on slavery,” said William Spring in an interview.

Spring said more education for children about Britain’s colonial past would help the country better integrate members of ethnic groups into the social fabric, saying many people from UK’s “very large immigrant community” would become aware of what their ancestors did to help build the modern Britain.

“Now, it’s proper to have an engagement with them, you know, in history, so they understand and appreciate the value of whatever their forefathers have done their ancestors have done,” said the expert, adding “I’m all in favor of learning about slave trade. It’s very important for children. Well it’s already taught in schools ... But it obviously would be good to develop this.

“I’m all in favor of Jeremy Corbyn’s idea .. It’s an example of what I would say political correctness as it concerns the current situation of the UK,” he said.

Spring said there has always been an issue of racial inequality in Britain and anywhere else in the world, adding that more information about the country’s colonial past would help close the divide between various ethnic groups and races in the British society.

However, he warned that any attempt to raise the social level of people with ethnic background should not come at the expense of the indigenous people, because it would play into the hands of the far-right nationalist groups, who believe migrants should be expelled from Britain.

“I think where the problem is, is the idea that the indigenous that is the people who were there before the emigrants and so on should not have a role. Because if the impression is given that the British working class are marginalized, this will only increase extremism.

“We have to take the thing very carefully because otherwise people will think the British are not being treated fairly,” he said.

Tags: Jeremy Corbyn England
Short Link rasanews.ir/201qir
Share
0
Please type in your comments in English.
The comments that contain insults or libel to individuals, ethnicities, or contradictions with the laws of the country and religious teachings will not be disclosed