Rasa - The Turkish security forces have found access to all the video files recorded by the CCTV cameras of the Saudi consulate in the last three months during their investigation into the case of prominent Saudi journalist Jamal Khashoggi, Saudi whistle-blower Mujtahid revealed on Thursday. 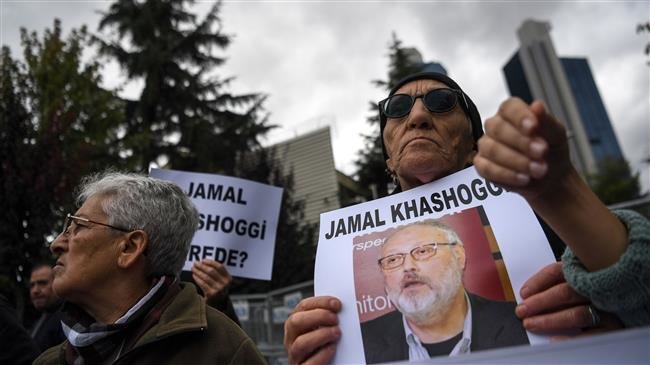 RNA - "All recorded files of the CCTV cameras of the Saudi consulate in Istanbul in the last three months are now in the hands of the Turkish security forces," Mujtahid, who is believed to be a member of or have a well-connected source in the royal family, said in a tweet on Thursday.

He added that the US officials, with the help of the CIA and Turkish authorities, have understood that Khashoggi has been killed and Saudi Crown Prince Mohammed bin Salman is the one to be blamed.

According to Fars News Agancy, Mujtahid said that US President Donald Trump and his advisor and son-in-law Jared Kushner have come to believe that saving bin Salman is growing rather impossible.

On Wednesday, a Turkish pro-government newspaper reported to identify the 15 men who Turkey claims murdered a journalist inside the Saudi Arabian consulate.

The front-page of Sabah displayed pictures of the alleged 15-member intelligence team who they said were behind the disappearance of Jamal Khashoggi.

Along with photographs of the suspects, Sabah published the names and birth years of the 15 Saudis they claim arrived on October 2. The newspaper published photographs of 12 of the men arriving in Istanbul’s Ataturk airport, captured as the men passed through passport control.

Khashoggi, a former Saudi government adviser, had been living in self-imposed exile in the United States since last year fearing possible arrest.

He has been critical of policies of the Saudi Crown Prince Mohammed bin Salman and Riyadh's intervention in the war in Yemen.

Tags: CCTV Turkish Turkey Saudi
Short Link rasanews.ir/201qil
Share
0
Please type in your comments in English.
The comments that contain insults or libel to individuals, ethnicities, or contradictions with the laws of the country and religious teachings will not be disclosed