WHO: 14 Palestinians Killed in Gaza by Israeli Forces in Last Two Weeks

Rasa - Latest figures showed that 14 Palestinians, including four children, were killed and 1,434 were injured by the Israeli forces during the demonstrations between September 23 and October 6 at the Gaza border, according to a special situation report by the World Health Organization (WHO) issued on Wednesday. 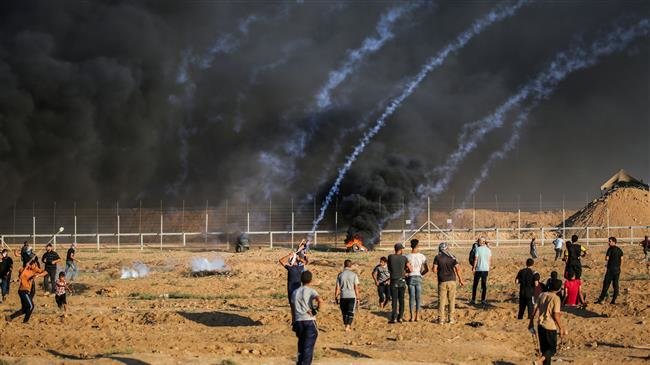 RNA - The report said from the 30th of March, the start of the March of Return protests on the Gaza borders with Israel, until the 6th of October, 205 Palestinians have been killed. Out of the total killed, 190 people were killed by Israeli forces during the demonstrations and 15 people killed during Israeli attacks, WAFA reported.

It added that out of the total 1,434 injured, 737 patients required transfer to hospitals or clinics, including 150 children and 32 females. Of the hospitalized injured, 12 cases were critically life threatening, 245 moderate, 453 mild and the remaining 27 were unspecified cases.

Since weekly mass rallies began at the Gaza border in late March, at least 205 Palestinians have been killed and more than 20,000 others wounded by Israeli army fire. The overwhelming majority of the dead and wounded have been unarmed, according to Gaza health officials.

Most of the casualties occurred in mid-May when Israeli forces attacked Palestinians marking the 70th anniversary of Israel’s occupation of historical Palestine and the ensuing ethnic cleansing of half a million Palestinian refugees.

The rallies call for ending the 12-year-long Israeli blockade of Gaza and for the right of return of the refugees.

The Amnesty International has also stressed that the attacks on Palestinian protesters by Israeli forces in the Gaza Strip are “willful killings constituting war crimes".

Human Rights Watch (HRW) called on the international community to hold accountable the Israeli regime for the cold-blooded killing of unarmed Palestinians in the besieged Gaza Strip.

Tags: Palestinian Israel Gaza
Short Link rasanews.ir/201qid
Share
0
Please type in your comments in English.
The comments that contain insults or libel to individuals, ethnicities, or contradictions with the laws of the country and religious teachings will not be disclosed