Eurasian States Angered by US Unilateralism

Rasa - Iranian Parliament Speaker Ali Larijani, who has just returned from a Eurasian Countries' Parliaments meeting in Turkey, said that all participants expressed shared discontent in the US policies and unilateralism. 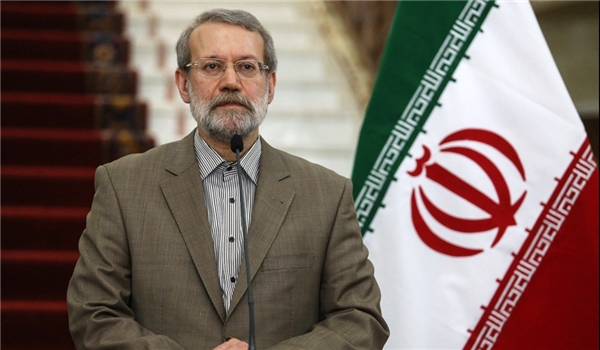 RNA - "Most participants in Eurasia conference were dissatisfied with the US unilateralism and considered it as harmful to the global security and development of countries," Larijani told reporters in Tehran on Wednesday.

He also said that in talks with his counterparts from different countries, he has discussed bilateral ties, regional issues and behavior of certain states which can spread insecurity in the region.

"We hope that these negotiations will yield positive results to improve cooperation between Iran and these countries," Larijani said.

Speakers of 20 countries’ parliaments and delegations from 17 Asian and European countries took part in the meeting, comprising around 700 officials convened in the Turkish resort city to discuss cooperation on economic and environmental issues, and sustainable development.

In relevant remarks on Tuesday, Larijani lashed out at the US unilateral policies in the world and added that such approaches would lead to more global problems.

According to Fars News Agancy, the Iranian top lawmaker made the remarks while addressing the third meeting of Speakers of Eurasian Countries' Parliaments in Turkey’s Antalya on

He further stressed that the US and Israel had undermined the global security. Larijani condemned the US President Donald Trump’s unlawful decisions, including the recognition of Palestine’s Jerusalem al-Quds as Israel's capital.

He also referred to the US’ withdrawal from the Paris Climate Agreement and adding fuel to the economic war and tariff tensions as other aggressive measures taken by Trump.

Larijani also touched upon the US’ unilateral withdrawal from the Iran’s landmark nuclear deal, and warned about the reappearance of unilateralism in the international arena.

The official asked the participants in the meeting for a closer cooperation, and adoption of practical policies to boost multilateral decisions, as well as redefining and developing their relations in the political, security, economic and business aspects.

Tags: US Iran Larijani
Short Link rasanews.ir/201qiQ
Share
0
Please type in your comments in English.
The comments that contain insults or libel to individuals, ethnicities, or contradictions with the laws of the country and religious teachings will not be disclosed