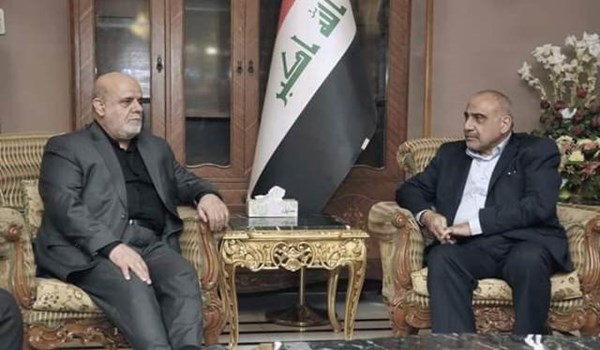 RNA - During the meeting in the Iraqi capital on Tuesday, Masjedi and Abdu Mahdi explored avenues for bolstering and reinvigorating mutual cooperation in political and economic areas.

During the meeting, the Iranian ambassador congratulated Abdul Mahdi on his election as Iraq's new prime minister.

Masjedi renewed Iran’s support for reconstruction of Iraq and helping that country to maintain its political and security stability.

Both sides also discussed bilateral ties as well as avenues for promoting them in the economic and commercial fields.

Tags: Iran Iraq
Short Link rasanews.ir/201qiJ
Share
0
Please type in your comments in English.
The comments that contain insults or libel to individuals, ethnicities, or contradictions with the laws of the country and religious teachings will not be disclosed