Speaker: Baghdad against US Anti-Iran Sanctions

Rasa - Speaker of the Council of Representatives of Iraq Mohammed Rikan Hadeed al-Halbousi declared that Iraq is strongly opposed to the US unilateral sanctions against Iran. 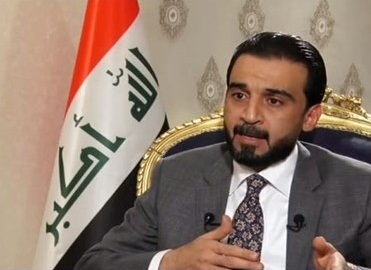 Warning that some countries are after sabotaging close ties between Iran and Iraq, Larijani reminded his Iraqi counterpart that Iran has been continuously supporting Iraq after the fall of the former Iraqi dictator Saddam Hussein.

Larijani underlined that Tehran-Baghdad relations should be further bolstered as Iraq's situation is now changed and there is no room for ISIL terrorists, but American play tricks as they are not the real friends of Iraqi nation.

"The US seeks to bring the Zionist regime to dominance in the region and this indicates the need to broaden and consolidate ties between Iran and Iraq," Larijani said.

Both the US and Zionist regime try to misuse the region, but they will not achieve their goals, he said.

Iraq has successfully passed a very tough terrain and in the new era of construction Iran is ready to help them reconstruct the country at any time, Larijani said.

The Iraqi parliament speaker, for his part, thanked Iran for its providing Iraq with support in fight against terrorism and annihilation of the ISIL.  Al-Halbousi called for further bolstering relations between the two countries.

"Baghdad is opposed to imposition of any economic sanctions against Iran and condemns the move as Iran's stability and other neighbors leave direct impact to Iraq's stability," reiterated the Iraqi top parliamentarian.

"We will stand shoulder to shoulder with Iranian officials and its people as this can help broaden economic relations between the two countries as this helps lessen impacts of economic sanctions imposed against Iran," the Iraqi parliament speaker said.

Baghdad also calls for preserving and respecting the integrity and sovereignty of regional countries, he said.

Enemies cannot achieve their sinister goals as Baghdad believes that it is possible to conquer all difficulties through firm determination and unity, he said.

Iraq announced last month that it had officially removed the US dollar in trade with Iran by declaring a legal limit for passengers to carry along euros and not dollars into the Islamic Republic.

Iran and Iraq enjoy very close ties in the post-Saddam era and early in September, Advisor to the Iranian Parliament Speaker Hossein Amir Abdollahian underlined that Tehran and Baghdad enjoy strategic relations, blaming foreign hands for the recent unrest and attack on Iran's consulate in Basra.

“There are clear traces of the complicity of foreign agents of the region’s warmongers in the incident of arson attack on the consulate of the Islamic Republic of Iran in Basra,” Amir Abdollahian wrote on his twitter page.

“British Shiite and Saudi Wahhabism won’t be allowed to drag Iraq into chaos. Tehran-Baghdad relations are strategic,” he added.

On September 21, Amir Abdollahian blasted the US for trying to hamper the relations between Tehran and Baghdad, and said the ties between Iran and Iraq are strategic

The Arabic-language al-Ahd news channel released the audio files on Saturday, revealing that Saudi Arabia has been running spying attempts to earn intelligence superiority in Iraq.

One of the files indicated that the Saudi intelligence agency has recruited several people in Iraq to be used in sensitive conditions, including the recent unrests in Basra, to monitor the police and security forces' moves in the region.

They showed that the Iraqi spies provided a Saudi officer, named Abu Khalid al-Saudi, with intelligence about the trafficking and deployment of security forces and army and police commanders in return for money and gifts.

The audio files also disclosed that the Saudi intelligence agency has created an extensive network of spies in Western, Central and Northern Iraq in addition to the Southern parts of the country.

According to Fars News Agancy, Iraqis in Southern areas of the country are demonstrating against lack of public services in poor areas and the angry protestors have set many government buildings and diplomatic missions in Basra on fire.

Protesters stormed the Iranian consulate in Southern Iraq's city of Basra, setting it on fire as part of demonstrations against lack of services and jobs in which several government buildings have been ransacked and torched.

Demonstrators on Friday broke into the consulate building in Basra which was empty when the crowd burst in.

Iraqi security officials announced a citywide curfew in Basra, a city of two million people, warning that "anyone present in the street" would be arrested.

Tags: US Iran Iraq
Short Link rasanews.ir/201qiG
Share
0
Please type in your comments in English.
The comments that contain insults or libel to individuals, ethnicities, or contradictions with the laws of the country and religious teachings will not be disclosed