Iran to Bomb Any Terrorist Center Near Border

Rasa - Chief of Staff of the Iranian Armed Forces Major General Mohammad Hossein Baqeri warned the anti-Iran terrorist groups not to set up bases near the country's borders or face its military force and airstrikes. 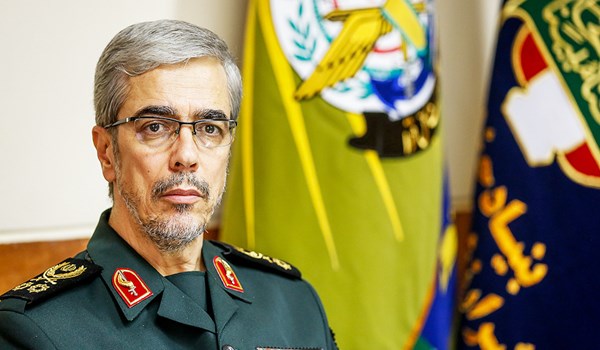 RNA - "Air power has many missions during peace time and if a terrorist group sets up strongholds near Iran's borders, we will not remain silent, and such missions and cooperation with air defense units are highly important to safeguard the air borders," General Baqeri said, addressing a forum in Tehran on Tuesday.

He also underlined the growing role of drones in defending the country and Iran's huge progress in building such aircraft, and said, "Today, the Islamic Iran is among the first seven major drone powers."

General Baqeri said that the October 1 missile and drone strikes against the ISIL terrorist group in Syria in response to the September 22 attacks in Southwestern Iran showed that the country's security is a redline for the Armed Forces.

The Islamic Revolution Guards Corps (IRGC) in response to the September 22 terrorist attacks in Southwestern Iran launched drone and missile strikes on ISIL strongholds in Eastern Syria on October 1.

According to Fars News Agency, the terrorists attacked the bystanders watching the annual Armed Forces' parades, marking the start of the Sacred Defense Week, commemorating Iranians' sacrifices during the 8 years of the Iraqi imposed war on Iran in 1980s, in disguise of the IRGC and Basij (volunteer) forces, killing and wounding several people, including innocent women and children.

The IRGC's Aerospace Force Brigadier General Amir Ali Hajizadeh announced later that the missile and drone strikes against the terrorist targets in Syria killed 40 ISIL commanders and smashed all targets.

Tags: Baqeri Iran Terrorist
Short Link rasanews.ir/201qi7
Share
0
Please type in your comments in English.
The comments that contain insults or libel to individuals, ethnicities, or contradictions with the laws of the country and religious teachings will not be disclosed